Once again, I don’t know where to begin when it comes to discussing what has happened on Scandal in the past episode, much less the last two episodes. I did not discuss last week’s episode, 312 We Do Not Touch The First Ladies, because I was traveling (I watched it the night it was on, but didn’t write about it). This week’s episode, 313 No Sun On The Horizon, once again contained so much that it’s overwhelming!

Last week, we learned that after Fitz’s father raped Mellie, she shut down from Fitz, causing him to become very angry at her. She still wouldn’t tell him what happened, preferring to keep it inside in exchange for Fitz’s political career (don’t forget in Season 2 when Big Jerry came on the campaign trail and Mellie was all apologetic for Fitz’s behavior when she should have been standing up for Fitz to his father!). However, keeping things inside didn’t go well for her and she ended up trying to kill herself. Seeing the vulnerable side of Mellie was heartbreaking, and we see that vice-president hopeful Andrew fell for her after he saved her from her suicide attempt. Mellie insists to Olivia that she never slept with Andrew, and in last week’s episode she did end up kissing him, but she walked away before things could go further. 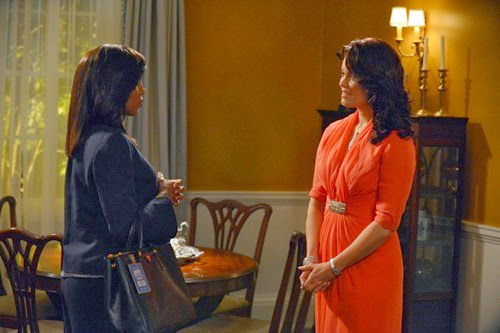 This week, Sally was shown as absolutely crazy, ranting on about who knows what, as Leo tried to prepare her for the first presidential debate. She reveals that she plans to go public with the fact that she killed her husband, which would in turn implicated Cyrus and Mellie for covering up her crime, and therefore the whole administration. Cyrus turns to Olivia to figure out the Sally problem and Olivia tries to take a back seat to this newest craziness. However, when she realizes the effect Sally’s confession will have on Fitz, she turns to him – telling him what happened and asking him to purposely lose the debate to show Sally that she doesn’t need to confess – God is on her side. Fitz says no, putting Sally at risk of a sniper bullet, but at the last minute he changes his mind and brings the attention back to his own moral failings rather than Sally’s.

Olivia was freaking out in this week’s episode. Well, I guess last week too, with all the yelling she did. This week it was laughing, when she realized that all three presidential candidates are murderers. I’m pretty unhappy with the way her character has been written in the past few episodes and I’m still waiting for that to turn around. I very much dislike her friends-with-benefits type relationship with Jake. Who says she needs a man with her at all? She was fine being single in the first season! 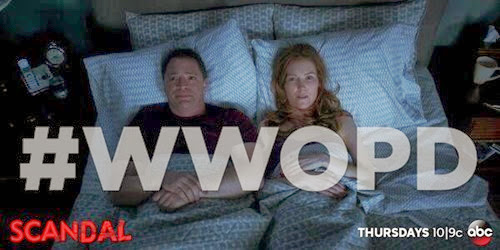 What Would Olivia Pope Do?

Ah Fitz. I love him, I can’t help it. Last week, the episode began with him fighting with Olivia about Jake. However, the fight took place in a hotel room while Fitz and Olivia were getting dressed. Mull over that one for a minute. Next, he asks Olivia if she actually has feelings for Jake and she says she doesn’t know. This week, Olivia is with Jake at the beginning of the episode, but by the end she seems to have chosen Fitz, telling him that while they may not end up in their ideal “Vermont” life, she’s still with him right now. I do wonder if he will find out about Mellie’s rape and how that will effect him. I believe that if she’d told him when it happened he would have supported her and their relationship would be strong now. (Of course, he probably wouldn’t have continued in politics if she’d told him, but still). 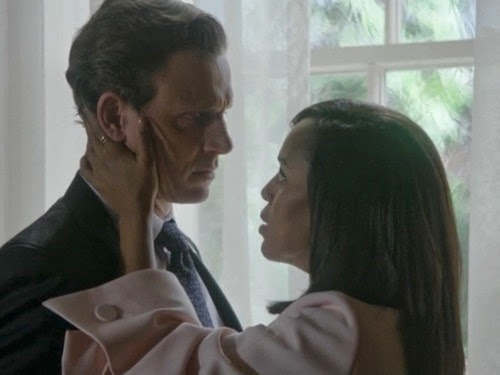 Even though Sally didn’t confess, someone out there is still worried that James, David, the NSA lady, and the reporter are going to blow up the secret. Jake, the new head of B613, is shown giving a monologue about the job, how killing people becomes normal, etc., and I thought for a minute we were going to see yet another person who is actually a part of B613. That was left untold, and as Jake steps out of a car at the end of the episode, shoots two people in their heads, and aims at James and David, the one who wasn’t shot may be the newest B613 member. The hype now is #whogotshot. And will that person die? Of course, it’s possible that neither James nor David was shot, and instead someone else shot Jake… 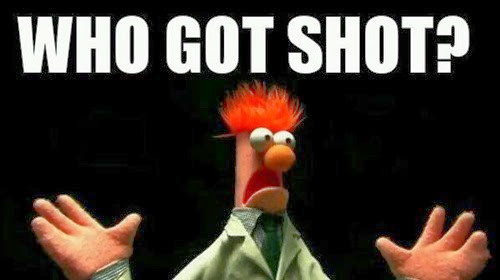 I know I have some readers who actually watch Scandal, so please chime in and tell me what you think!