Alternate name: That time we almost had to reschedule our cruise.

One week before the date of our cruise, Simon got sick. For most of the day, he was listless and lethargic and kept curling up and refusing to move. I thought he was just tired, but Dave took one look at him and decided he needed a doctor. The on-call doctor at our family practice wasn’t a pediatrician and sent Dave to the pediatric ER instead. It turns out it was the flu. Luckily, after a few doses of Tamiflu, Simon was just fine. But we were left with the fear that the other kids would catch it and would be sick when we were schedule to leave on our trip. We had travel insurance and would be able to reschedule, but that was not what I wanted to do! Somehow we managed to make it through with no one else getting sick. While we were in the worrying stage, Dave reminded me of all the other times someone had been sick before a scheduled vacation – and so far, every time we have still be able to go!

There was that time in 2001 when Dave got appendicitis one week before we were to leave for Hawaii for our honeymoon. He was on the phone in his hospital room trying to find out about changing or canceling our plans, but we would have lost a lot of money. In the end, he was fine to travel and by the end of our trip, he could even lift the suitcases.

There was the time in 2010 when I broke my ankle just before we were to leave for a road trip. We weren’t going to go, but I figured I would need a lot of help at home and Dave would have to take off work anyway, so we went. 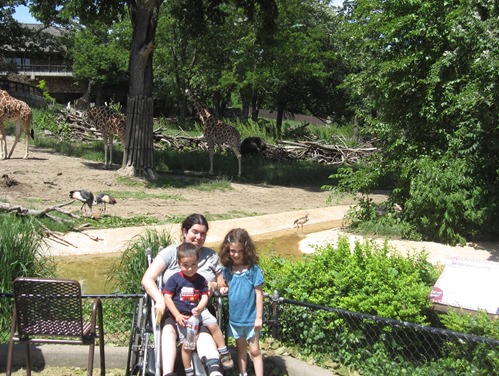 Me in a wheelchair at the Omaha Zoo

Then there was the whole debacle with my surgery this past summer and the question of our June Florida trip. We went. Zachary was actually sick just before we left – which caused him to sleep through the whole first leg of the journey!

Oh – and we went on the cruise too! (I’ll be posting about it soon, I promise!)

Which leads me to the fish.

While grabbing our bags after a flight from Kansas to Florida, I stated that my suitcase smelled like fish. Fish? Definitely fishy. We saw the handles of our suitcases were wet – maybe it was just rainy. And we headed out. Had dinner, checked into our hotel. Started getting ready for bed. And there was that smell again! And my suitcase was wet. Except when I opened the suitcase, it wasn’t mine, it was Dave’s. All his clothes were smelly like fish. He had to head back to the airport, where the Southwest baggage complaints office replaced his fishy suitcase with a brand new one. Then he was up half the night washing enough of his clothes so that he could board the cruise without smelling! Once on the cruise, he sent the rest of his clothes to be cleaned. Southwest reimbursed him for this laundry with a check on the spot before we went home. Not sure if they will reimburse him for his time. 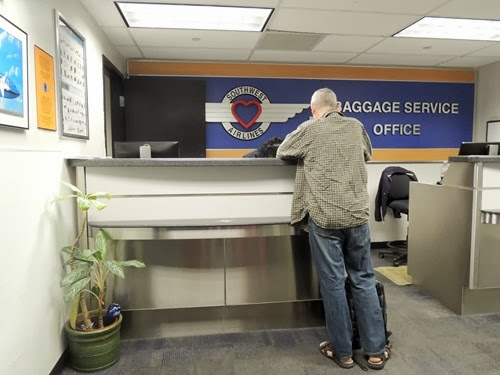 And I started thinking about all the suitcase related mishaps we’ve experienced over the years.

That trip to Hawaii? While we were on a shuttle bus from the airport to our hotel, somehow one of our bags was removed from the bus at an earlier stop. So when we got to our hotel, it wasn’t there.

When Dave and I were in college, we studied abroad in Israel. Some nice Israeli dude accidentally took Dave’s suitcase home with him.

There have been times when all but one of our suitcases has made our flight home.

And oh, the things I have forgotten to pack. There’s always something!

Then there’s the flights that have been delayed and / or cancelled.

There was the time we flew to Alaska with plans to stay in a hotel. We arrived so far into the night that sleeping at a hotel wouldn’t have been worth the money for the short time we would have been able to spend there. So we slept in the airport.

There was the time we were driving to the Ft. Lauderdale airport and got stuck in traffic and missed our flight. The next flight out was delayed. The good thing was that in the end we got put on a plane where our seat number from the former aircraft landed us in first class on the new one!

Stuck in NJ an extra day due to a rain storm? That’s happened.

Think airplane related mishaps can be solved by road-tripping? Nope. When we drove to San Antonio we ran over a Texas sized bolt and needed a new tire. 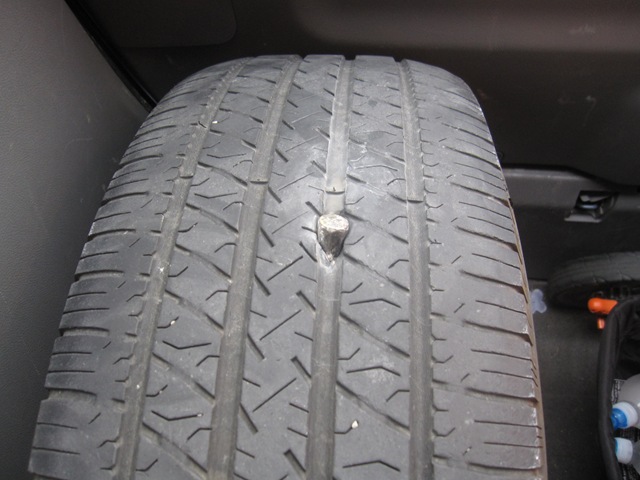 And on the way back from Florida, with an hour left to home, we got another flat tire.

That’s not to mention the scary hail storm we drove through on the way to Florida!

Up above, I mentioned those of us who have gotten sick before leaving for vacation – we have also had times of getting sick on vacation. Like that time when I threw up in my sleep in a bed in a hotel in Israel. Or the time Zachary got bronchiolitis in Disney World and he kept coughing up tons of breast milk all over the Magic Kingdom. And Gabbie threw up in the car on the Pacific Coast Highway. And I got strep throat in Florida. 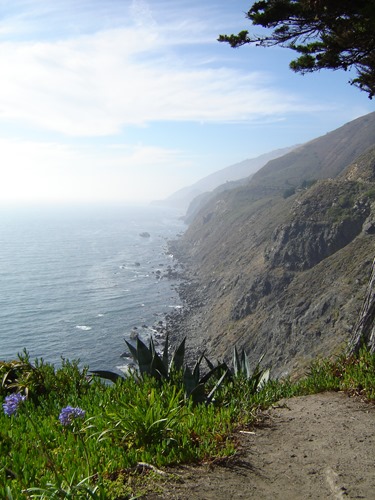 There was the time that Dave got pulled over for talking on a cell phone while driving in Israel – we had just landed and he needed directions to his sister’s house. Yes, he got a ticket.

On the same trip, our rental car was broken into and our borrowed GPS was stolen.

But the worst travel related mishap we’ve had thus far happened when I was not on said trip. (If I was there it would have been way more of a disaster because I might have gotten myself arrested by yelling at those involved!)

Dave was flying to Israel for our nephew’s bar mitzvah. He decided to offer up his seat on the airplane – a voluntary bump in exchange for vouchers. He really likes to do that. He was put on a flight through London; however, when he arrived in London the airline that was meant to take him onwards to Israel had no record of his reservation on their flight. All of the other flights were completely booked and he had no option but to fly right back to NJ. That’s right – he flew to London and was sent back, never making it to Israel for the bar mitzvah. He was compensated for this major mistake, but of course he was disappointed!

Now, tell me about your worst travel mishap! Or do these things just happen to us?