I received this book from TLC Book Tours for my review. Almost True Confessions is the second in a series featuring Miranda “Rannie” Bookman, a former copywriter turned closet sleuth.  “What could be more fun for a freelance copyeditor than a juicy exposé about one of Manhattan’s most beloved society doyennes? But when Rannie arrives at the east side apartment of reclusive author Ret Sullivan, she finds more than the final draft of the manuscript waiting for her: tied to the bed and strangled with an Hermès scarf is Ret’s half-naked body. Was this merely a case of rough sex that got a little too rough, as the police believe? Or was Ret murdered because someone didn’t want her to meet her deadline? Once again, the heroine of Jane O’Connor’s Dangerous Admissions proves that her mind is just as sharp as her blue  pencils in Almost True Confessions: Closet Sleuth Spills All, a mystery full of sly humor and romance.”

Jane O’Connor is the author of the Fancy Nancy children’s series – and there is even a reference to that series thrown into this book. I usually do not like to read the second book in a series without reading the first. I did not know at first that there was a first book, but the references to a previous crime and situation Rannie had been involved with are shared early in this book. This story does stand alone and you do not need to read the first one to read this one.

With a cast of characters ranging from the exposé writer to those that publish her books, and from Rannie’s children to her ex-mother-in-law,  there was plenty in this book to keep me reading. There is a good deal in the book about grammar, as Rannie corrects others’ grammar in her head, and art. I was also surprised by the many references to the characters being Jewish. The mystery in the book does take awhile to solve, and unfortunately, having finished this book a few weeks back, I had trouble recalling the solution to the crime!

Overall, I’d say this book was an easy, quick read that was entertaining, but not entirely memorable. It was cute enough, but I’d probably stick to reading Jane O’Connor’s children’s books! 1) What are you currently reading? Tell us a bit about it!

I am currently reading The Perfect Husband by Lisa Gardner. I ran out of things to read and after trying two other books I had in the house, I stuck with this one! I’m almost finished so expect a review soon. I also got 4 books from the library so I have more things to read!

2) What are your five most recent book purchases?

I very rarely purchase books so I can’t remember the last few I purchased!

3) Have you ever named/nicknamed anything (person, pet or thing) after a character? Who and why?

My dog’s name is Rudy, but when we got him, he was called Harry and his brother was called Ron. I briefly considered sticking with the name Harry for him! I did have a fish named Hufflepuff at one point.

4) If you could live in one book, all of its characters and in the town, which would it be?

I guess I’d have to go with the Harry Potter series! Which by the way, I finally got Gabbie to start reading! She’s almost done with book 1. She is so cute telling me when things happen in the book, like when Hermione became nice! Oh – that reminds me. The turtle in her class at school is named Hermione!

5) Can you think of a book you read that taught you something concrete that you’ve never forgotten? Tell us about it.

The Nursing Mother’s Companion was a big help to me right after I had Gabbie!

Now, here’s another girl who loves to read and review books, Shoshanah! 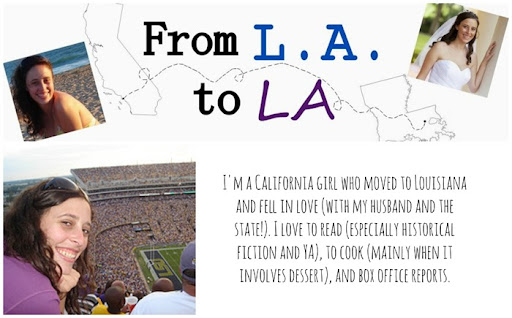 I can’t really remember when I met Shoshanah, but I love her and her blog! She has been recapping her wedding day and I will be very sad when she is done! Shoshanah reviews books and movies, is Jewish like me, and also loves to travel!

If you could travel anywhere, where would you go? My top 3 are definitely Greece, Egypt, and Australia.

Where have you previously traveled that you loved and would return to? When I was a one-year-old my parents took me to France and The Netherlands. I’ve been back to France since then (twice actually!), but would love to go back to The Netherlands and this time actually remember it.

Do you have any upcoming travel plans? Unfortunately nothing concrete, but I do have a few ideas that hopefully we’re able to pull off!

Go visit Shoshanah and tell her I sent you!