On our 6th and last day at Disney World, we returned to Epcot to do the other half of the park, try to meet the characters we missed, and get in our last bit of Disney before heading to Tampa. We had to do a bit of back tracking in the World Showcase to be in the right places at the right times, but besides the heat and humidity, this was just fine! I posted our Epcot plans over here.

We got up pretty close to the gate for park opening, and headed inside and straight to Test Track. This time, I went first with Gabbie and Zachary, so I knew I was guaranteed to not only get on the ride, but have someone to ride it with! Dave and Simon waited for us in the exit area of the ride, where Simon enjoyed climbing in and out of the various cars on display. 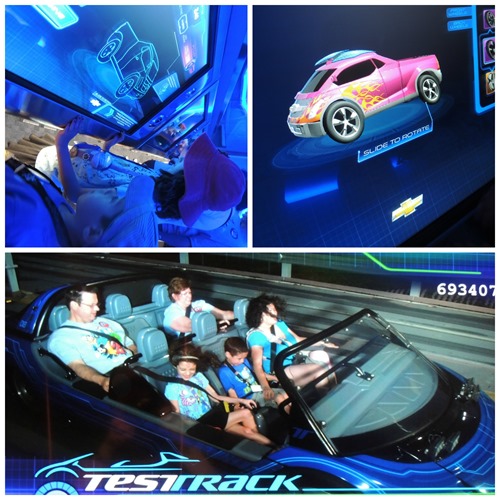 First, you design a car. Then you take the ride. But it doesn’t really use your design as part of the ride. The kids thought the ride went too fast! 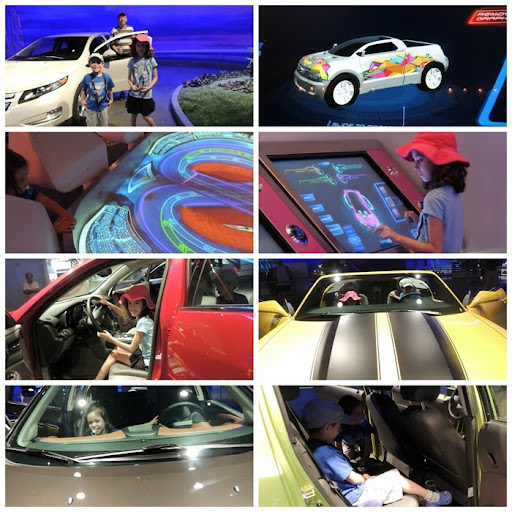 While Dave went on the ride, we hung out in the cars area. Gabbie designed another car as well. She enjoyed that part of it!

From there, we headed over to the Imagination Pavilion. Gotta love that Figment character! This pavilion was pretty empty, but there really wasn’t that much to do in the ride exit area. We played around for a little while though. 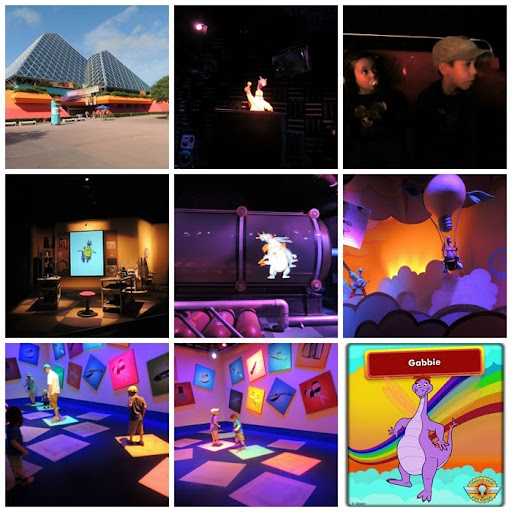 And then we played with the fountains outside. 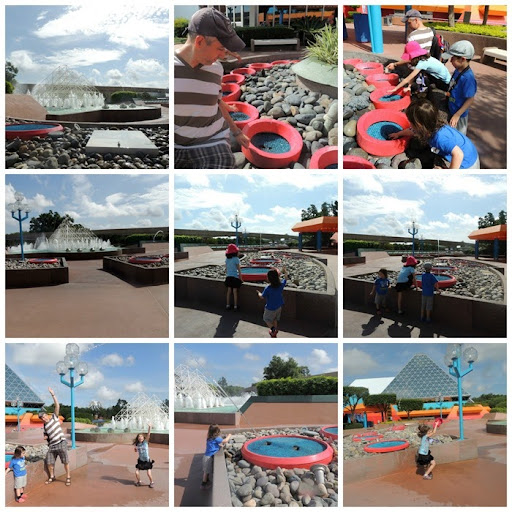 Since it wasn’t yet time for the World Showcase to open, we passed some time inside of Innoventions and also had a quick stop back in Club Cool for some Coca Cola products! 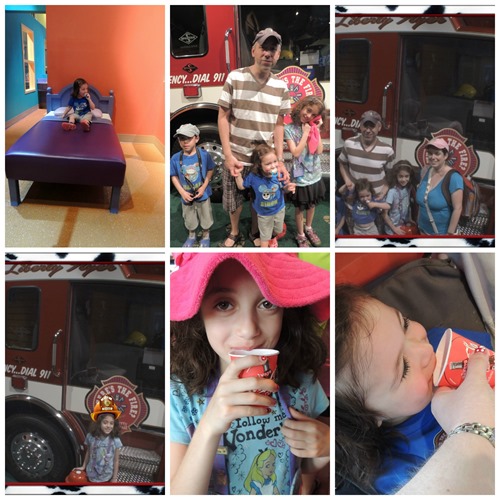 Then it was World Showcase time. Our first stop was Norway, because we wanted to get on the ride without waiting. We straight out lied to the kids and told them there was no drop in the ride. Well, there is. Sorry kids. After the ride we looked around a bit and made sure to go to the Kidcot station to color our Duffy Bears and get our Passport books stamped and signed! 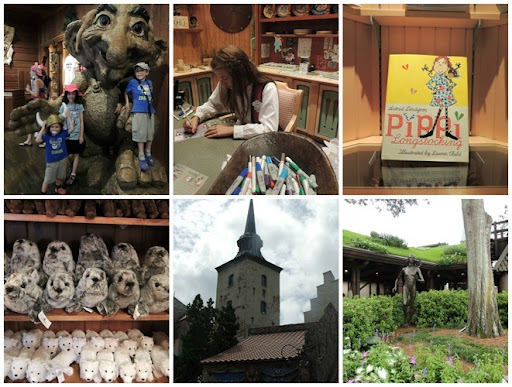 Next up was Mexico. I really love the interior of the Mexican Pavilion as it makes you feel like you are truly in Mexico! I will also never forget being there on the phone with Zachary’s doctor when he was 6 months old and coughing up breast milk all over Disney World – he was later diagnosed with bronchiolitis. There was of course a stop at the Kidcot station, plus a ride on the Gran Fiesta Tour, which the kids loved and declared one of their favorites! 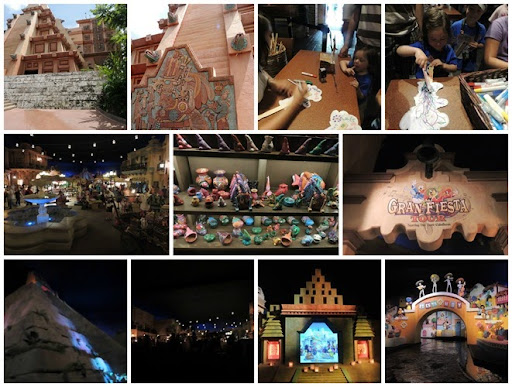 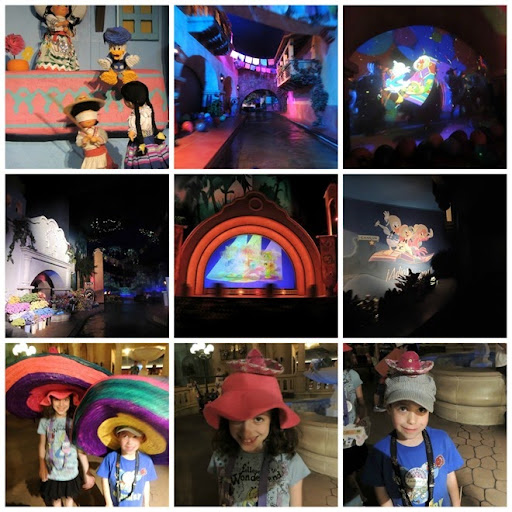 Outside of Mexico, we were able to get a good spot in line to meet Mexican Donald, and we found out that it was Donald Duck’s 79th birthday that very day! (June 9). Zachary was of course still wearing his birthday pin, so a lot of people told him he shared his birthday with Donald, though his birthday was the 7th, not the 9th. Still, I thought it was really cool to meet Donald on his birthday! 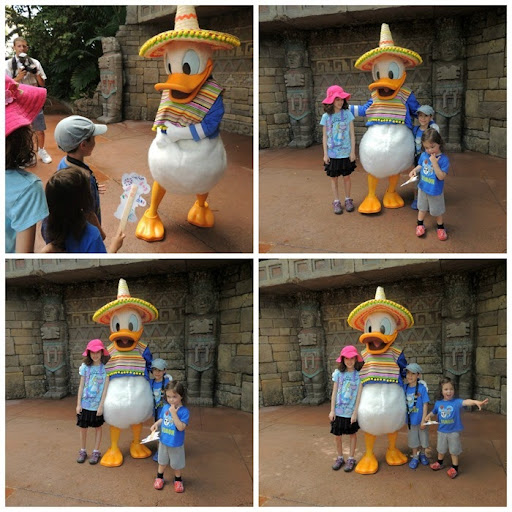 Next, we went to China to meet Mulan, watch the movie, and see the displays, as Gabbie learned about China in 2nd grade and was excited about the country in Epcot! 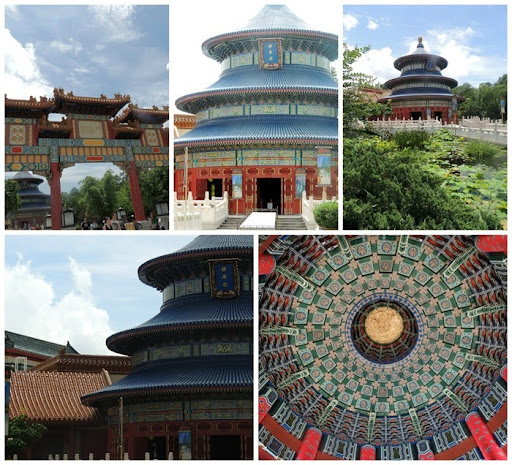 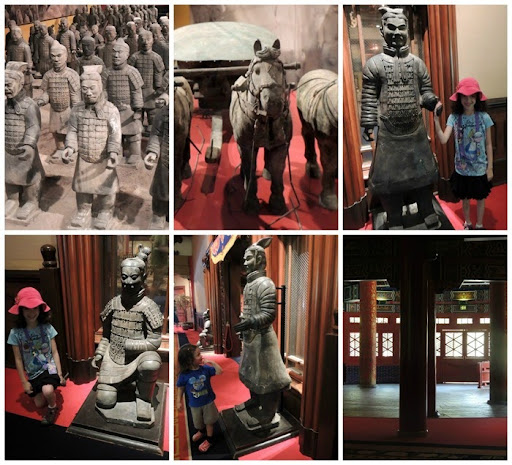 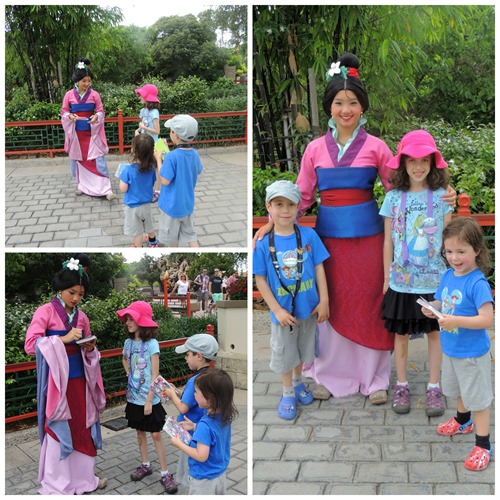 We ate our lunch in Japan, where I couldn’t resist a few more photos: 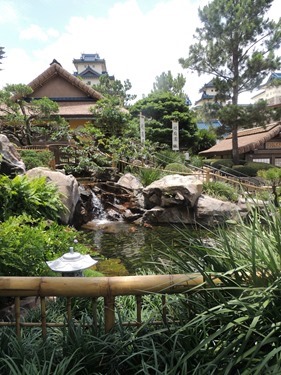 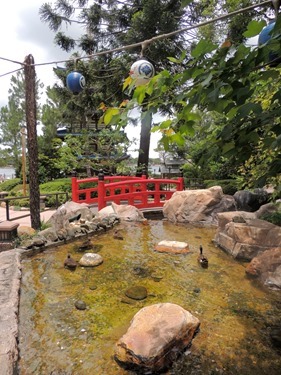 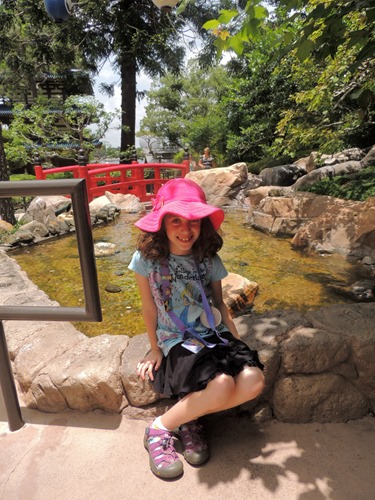 And then we were off to Morocco to meet Jasmine and Aladdin, one of the meet ups we’d missed on Day 1. Aladdin was funny, singing along with the music playing in the room and signing his name huge across the card that was meant for both him and Jasmine to sign. 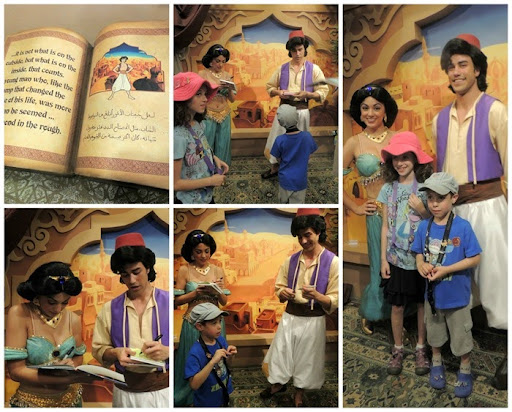 Next up was Germany, complete with a huge line in the heat to meet Snow White! Finally Dave told me to take the kids to the Kidcot station while he waited in line. We had a nice conversation with Snow White. She was calling Simon a dwarf, Sleepy, because he was sleeping in his stroller, but then he suddenly woke up and got in the picture too! 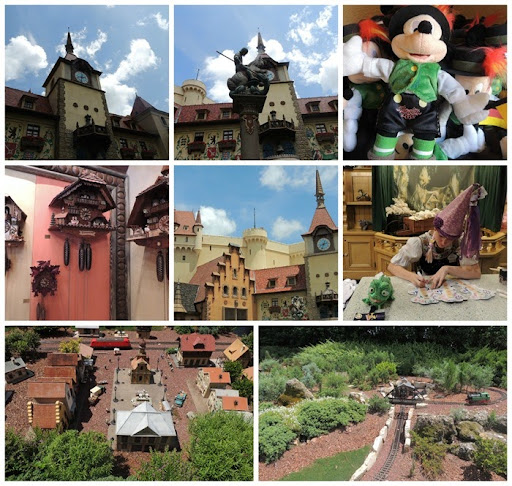 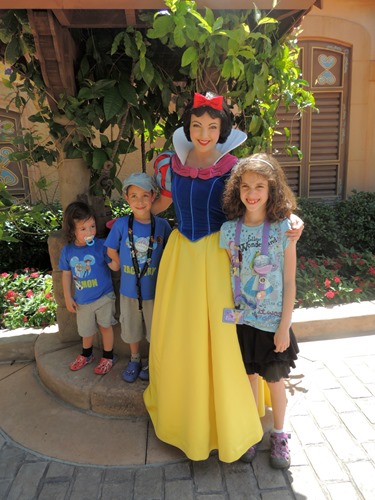 The next country was Italy. With no characters to meet, we kind of walked right through. 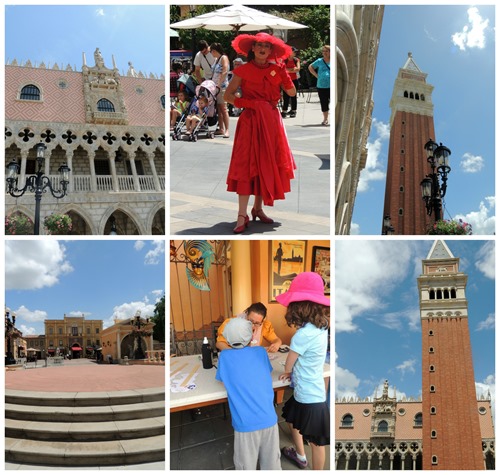 And on our way to America, something cool happened! The back doors opened up and out came Donald Duck and Mickey Mouse! I had just been reading about possibly seeing characters in training at random times at that exact spot – and we were there at just the right time! Plus, it was still Donald Duck’s birthday, so we got to wish him a Happy Birthday as well as see him in his regular clothes – he no longer has a regular meet and greet in those clothes anywhere in Disney World! 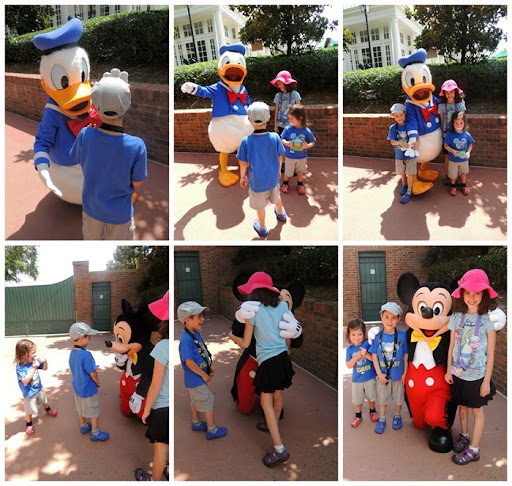 In America, we were at first told that no show was taking place at the time we were there, but on our way back from the Kidcot station, the Voices of America were about to perform. They were quite entertaining! We didn’t stay for the America movie though, because we were hoping to catch the Chinese Acrobats back in China. 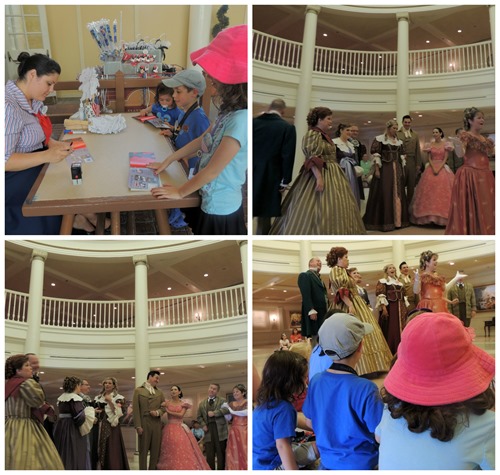 On our way back, we were stopped by the bridge opening to bring out the globe for Illuminations that night! It was really cool to see it up close. 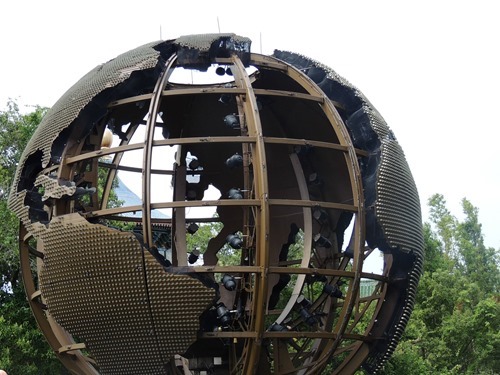 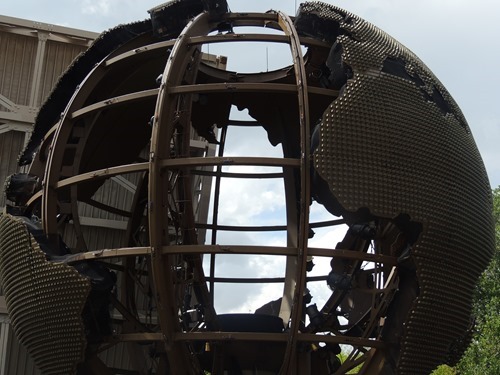 While we were waiting, I wandered over to the African Outpost to look for a paper towel to mop up my sweat, and I saw this: 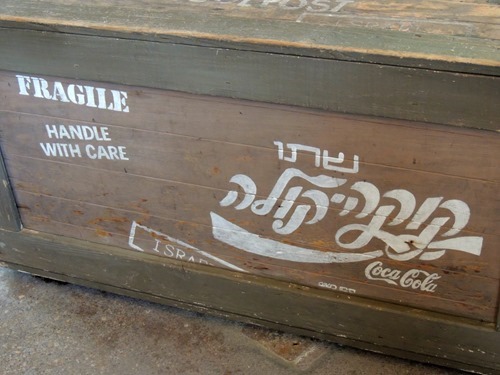 When we got to China, we found that they were doing the show inside, due to the heat I imagine, which was nice! 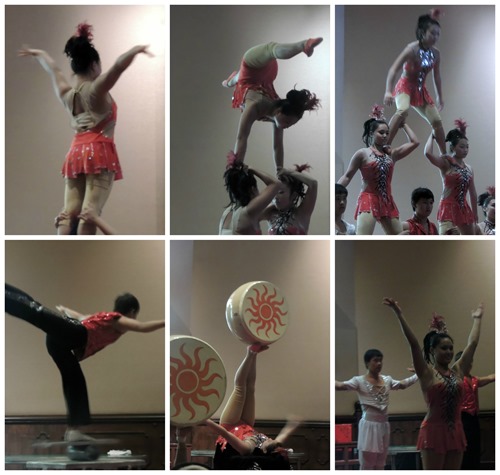 For our final stop, we decided to meet Duffy the Bear. My kids hadn’t even heard of Duffy Bear before this trip, but after coloring him in at the Kidcot stations, they wanted to meet the real thing. He was very cute actually! He stole our marker and hid it, and when I asked him where Mickey was, he pointed behind him. It looked like he was pointing to the picture of Japan, so I said “Japan?” and he gave me a little bow as they would do in Japan. 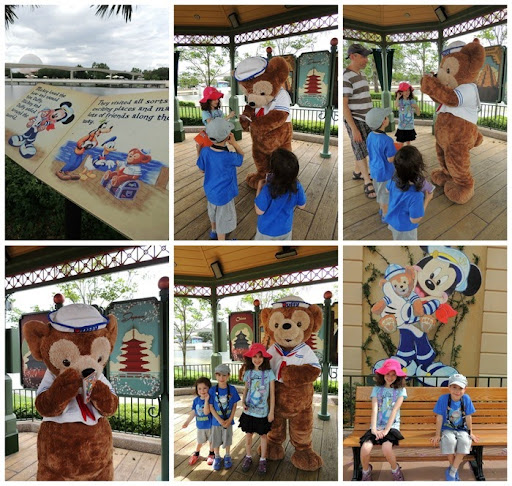 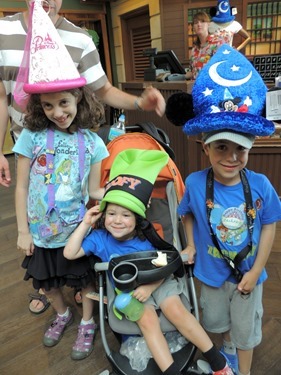 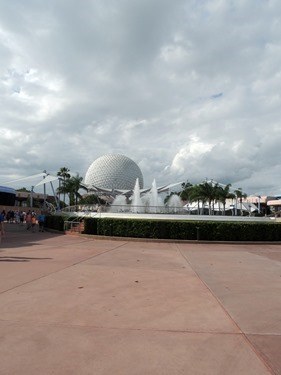 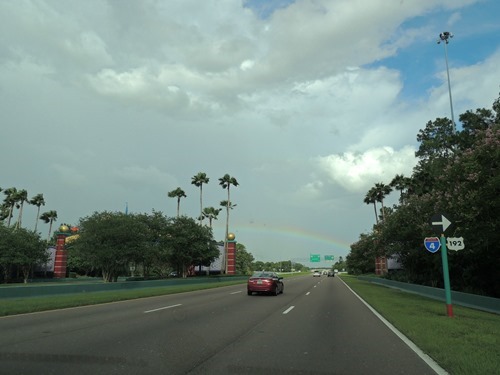 Today’s total: 4 rides, 8 characters. We ended up skipping Aurora and Belle in France, because we’d already met both of them, even though we didn’t get Belle’s autograph. The one character we wanted to meet but did not get to throughout the week was Daisy Duck. I don’t think anyone was too unhappy about it though.

Now that I’ve shown you everything we did in Disney World, I hope you’re not tired of it yet, because I just received our Photo Pass CD, which means I have more photos to share! I will be posting them sometime soon, as well as sharing our total character / ride report and our newest pins in our pin collections!