Since it’s been a few weeks from the last time I shared what I’ve been reading, I have a few books to share this week! 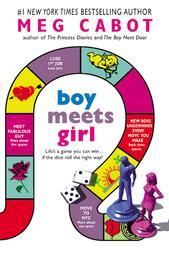 First up was Boy Meets Girl by Meg Cabot. “Meet Kate Mackenzie. She: works for the T.O.D. (short for Tyrannical Office Despot, also known as Amy Jenkins, Director of the Human Resources Division at the New York Journal), is sleeping on the couch because her boyfriend of ten years refuses to commit, can’t find an affordable studio apartment anywhere in New York City, thinks things can’t get any worse. They can. Because: the T.O.D. is making her fire the most popular employee in the paper’s senior staff dining room, that employee is now suing Kate for wrongful termination, and, now Kate has to give a deposition in front of Mitch Hertzog, the scion of one of Manhattan’s wealthiest law families,who embraces everything Kate most despises … but also happens to have a nice smile and a killer bod. The last thing anybody — least of all Kate Mackenzie — expects to find in a legal arbitration is love. But that’s the kind of thing that can happen when … Boy Meets Girl.” This book is told entirely through emails, phone messages, and transcripts of court room meetings. It was certainly an interesting way to read a story! The book was cute and held my attention, though I though more character development could have helped. The one subplot that might have deserved more attention was the awfulness of Mitch’s family. They were homophobic and antisemitic. They deserved someone to tell them off for their viewpoints!

I found it funny that just after finishing a book by Meg Cabot, she was one of the people who gave a review on the back of Lauren Graham’s book Someday, Someday, Maybe. “It’s January 1995, and Franny Banks has just six months left of the three-year deadline she set for herself when she came to New York, dreaming of Broadway and doing “important” work. But all she has to show for her efforts so far is a part in an ad for ugly Christmas sweaters, and a gig waiting tables at a comedy club. Her roommates―her best friend Jane, and Dan, an aspiring sci-fi writer―are supportive, yet Franny knows a two-person fan club doesn’t exactly count as success. Everyone tells her she needs a backup plan, and though she can almost picture moving back home and settling down with her perfectly nice ex-boyfriend, she’s not ready to give up on her goal of having a career like her idols Diane Keaton and Meryl Streep. Not just yet. But while she dreams of filling their shoes, in the meantime, she’d happily settle for a speaking part in almost anything—and finding a hair product combination that works. Everything is riding on the upcoming showcase for her acting class, where she’ll finally have a chance to perform for people who could actually hire her. And she can’t let herself be distracted by James Franklin, a notorious flirt and the most successful actor in her class, even though he’s suddenly started paying attention. Meanwhile, her bank account is rapidly dwindling, her father wants her to come home, and her agent doesn’t return her calls. But for some reason, she keeps believing that she just might get what she came for.” I honestly expected more from this book. Lauren Graham was amazing as Lorelai in Gilmore Girls – but this book isn’t written in the voice of Lorelai, not that it should have been! However, the Franny character was just so-so for me. I found the book hard to get into and not as hilarious as I had hoped it would be. I did love the relationship built between Franny and her roommates and the development of her self-confidence as the book went on.

Finally, the other night I finished reading Speak by Laurie Halse Anderson. “”Speak up for yourself–we want to know what you have to say.” From the first moment of her freshman year at Merryweather High, Melinda knows this is a big fat lie, part of the nonsense of high school. She is friendless, outcast, because she busted an end-of-summer party by calling the cops, so now nobody will talk to her, let alone listen to her. As time passes, she becomes increasingly isolated and practically stops talking altogether. Only her art class offers any solace, and it is through her work on an art project that she is finally able to face what really happened at that terrible party: she was raped by an upperclassman, a guy who still attends Merryweather and is still a threat to her. Her healing process has just begun when she has another violent encounter with him. But this time Melinda fights back, refuses to be silent, and thereby achieves a measure of vindication. In Laurie Halse Anderson’s powerful novel, an utterly believable heroine with a bitterly ironic voice delivers a blow to the hypocritical world of high school. She speaks for many a disenfranchised teenager while demonstrating the importance of speaking up for oneself.” Laurie Halse Anderson is a writer who speaks for teenagers. She really knows how to describe what teenagers go through and even if the reader has not experienced what the character is dealing with, struggle of everyday life in high school is relatable. I really liked this book. Melinda was likeable and strong, even when she didn’t feel that way inside. The ending of the book was especially fulfilling! I was surprised to learn that this book was previously made into a movie starring Kristen Stewart! I would like to see that at some point.

Now is the perfect time to launch your own business and join Stella & Dot’s growing team of Stylists! Stella & Dot creates flexible, work from home business opportunities for entrepreneurial women. Create the success you deserve. And for a limited time, Stylists who sign up between now and June 30th will receive an extra $100 in product credit for a fabulous start to launching their own business! To find out more information visit www.stelladot.com/stylist. Get started today!