I may have mentioned that it’s Passover this week. It starts tomorrow night and continues on through next Tuesday. I will not be online this week on Tuesday or Wednesday (until night time) and next week on Monday or Tuesday (until night time). Passover is definitely one of the more well known Jewish holidays. It is observed to remember the Jewish people’s Exodus from slavery in Egypt.

The most significant observance related to Passover involves avoiding chametz (leaven; sounds like “hum it’s” with that Scottish “ch”) throughout the holiday. This commemorates the fact that the Jews leaving Egypt were in a hurry, and did not have time to let their bread rise. It is also a symbolic way of removing the “puffiness” (arrogance, pride) from our souls.

Chametz includes anything made from the five major grains (wheat, rye, barley, oats and spelt) that has not been completely cooked within 18 minutes after first coming into contact with water. Orthodox Jews of Ashkenazic (Eastern European) background also avoid rice, corn, peanuts, legumes (beans) and some other foods as if they were chametz. All of these items are commonly used to make bread, or are grown and processed near chametz, thus use of them was prohibited to avoid any confusion or cross-contamination. Such additional items are referred to as “kitniyot.”

The grain product we eat during Pesach is called matzah. Matzah is unleavened bread, made simply from flour and water and cooked very quickly. This is the bread that the Jews made for their flight from Egypt. We have come up with many inventive ways to use matzah; it is available in a variety of textures for cooking: matzah flour (finely ground for cakes and cookies), matzah meal (coarsely ground, used as a bread crumb substitute), matzah farfel (little chunks, a noodle or crouton substitute), and full-sized matzah (sheets about 8 inch square, a bread substitute). 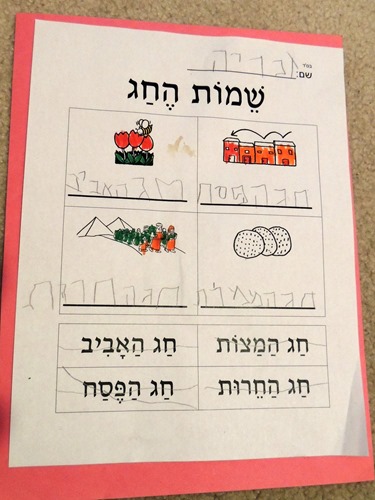 This is Zachary’s names of the holiday sheet. The name for Passover in Hebrew is Pesach. “The holiday is also referred to as Chag he-Aviv, (the Spring Festival), Chag ha-Matzot , (the Festival of Matzahs), and Z’man Cheiruteinu , (the Time of Our Freedom) (again, all with those Scottish “ch”s).” 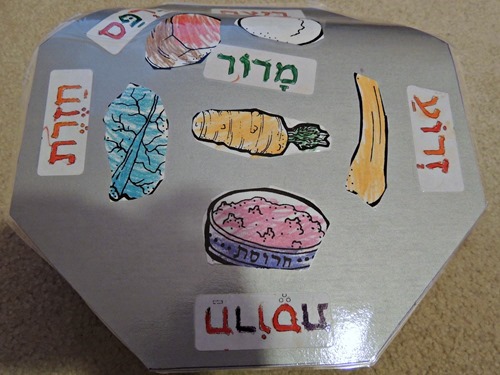 Zachary made a Seder Plate at school. “On the first two nights of Pesach, we have a special family meal filled with ritual to remind us of the significance of the holiday. This meal is called a seder, from a Hebrew root word meaning “order,” because there is a specific set of information that must be discussed in a specific order.” 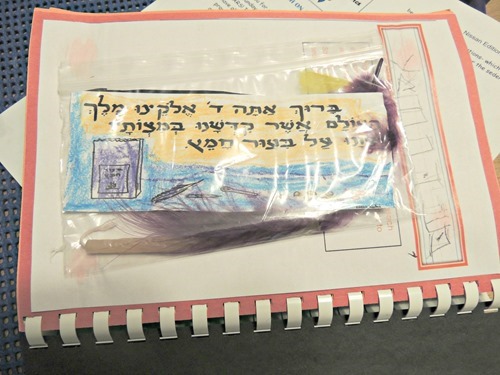 “The process of cleaning the home of all chametz in preparation for Pesach is an enormous task…After the cleaning is completed, the morning before the seder, a formal search of the house for chametz is undertaken, and any remaining chametz is burned.” Above is the kit for the search for remaining chametz.

This is Simon’s picture about searching for chametz: 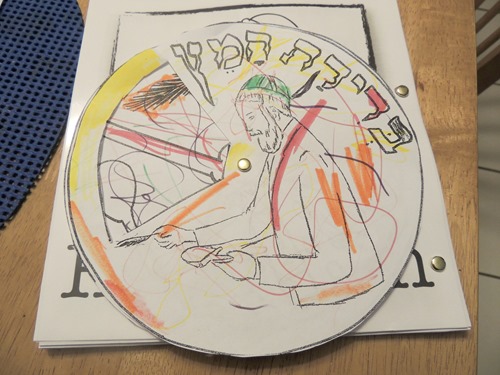 Below is a picture of the fire for burning the remaining chamez. 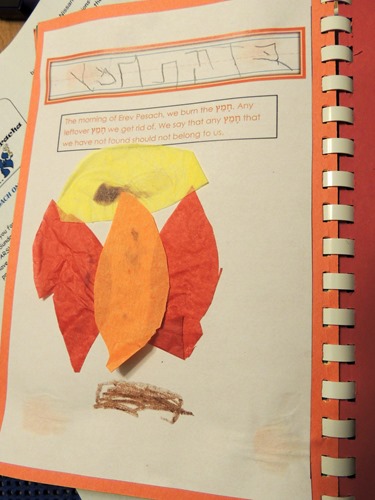 The above pages are inside Zachary’s Hagaddah. (aside from the one that is Simon’s picture).

This is the cover of Zachary’s Hagaddah: 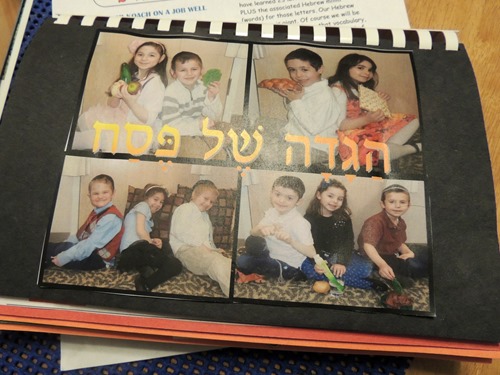 “The text of the Pesach seder is written in a book called the haggadah. The haggadah tells the story of the Exodus from Egypt and explains some of the practices and symbols of the holiday.” This cover of Zachary’s Haggdah shows him and his friends acting out the four questions which children typical ask at the seder.

Clockwise from the top right, with Zachary in the picture:

Here are some more of the pages that Zachary and Simon made in their Hagaddahs: 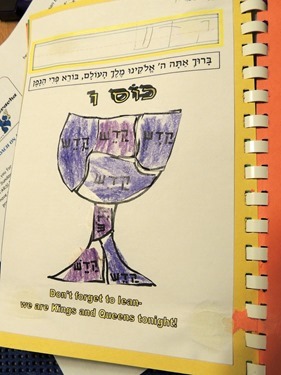 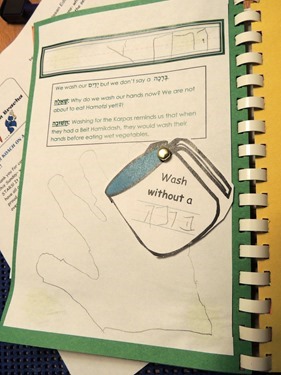 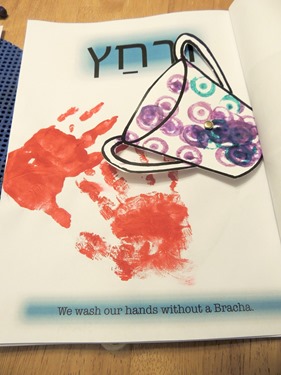 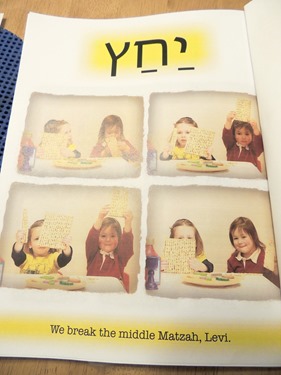 Simon’s version of the hand washing page and “One of the three matzahs on the table is broken. Part is returned to the pile, the other part is set aside for the afikomen.” (Simon) 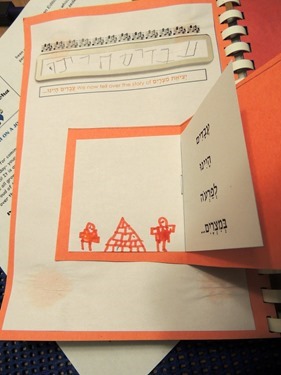 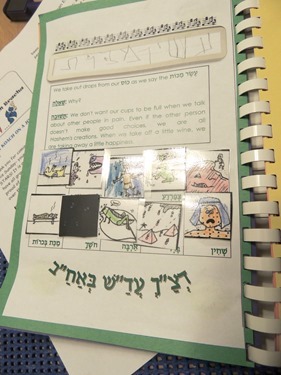 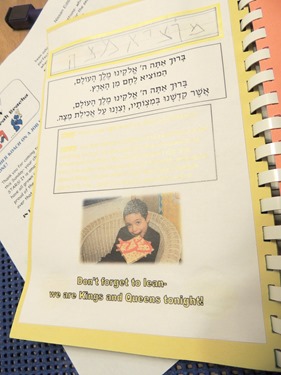 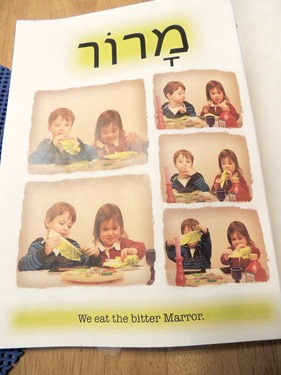 We eat the Matzah (Zachary) and “A blessing is recited over a bitter vegetable (usually raw horseradish; sometimes romaine lettuce), and it is eaten. This symbolizes the bitterness of slavery.” (Simon) 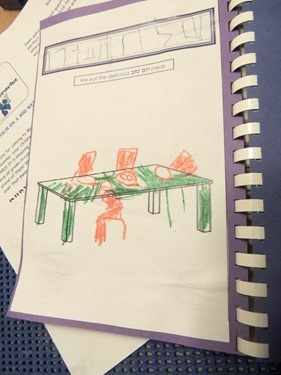 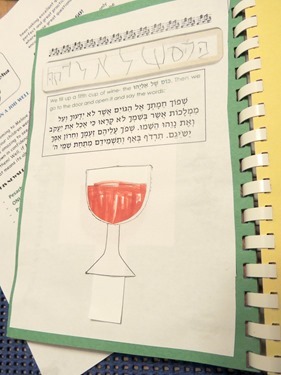 We eat the meal. When we get to the fourth cup of wine, the cup for Elijah the Prophet is poured. Elijah “is supposed to herald the Messiah, and is supposed to come on Pesach to do this.” Zachary’s has an adjustable level of wine. 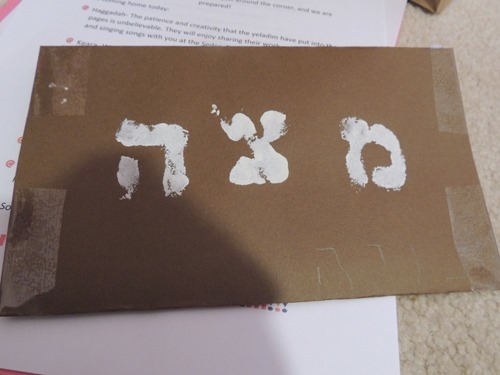 “The piece of matzah set aside earlier is eaten as “dessert,” the last food of the meal. Different families have different traditions relating to the afikomen. Some have the children hide it, while the parents have to either find it or ransom it back. Others have the parents hide it. The idea is to keep the children awake and attentive throughout the pre-meal proceedings, waiting for this part.” This is Zachary’s Matzah holder.

We are looking forward to using these school projects and the ones we’ve saved from previous years at our seders!