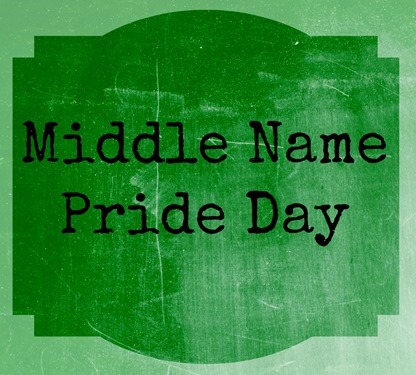 I heard a rumor that today is Middle Name Pride Day (or it might have been on Friday, but that’s ok). This kind of silly holiday appeals to me because asking people their middle name is one of my favorite hobbies! I love names in general but when I was in college and I had two good friends named Mark (one was Marc) and my brother’s name is also Mark, I just had to find out their middle names. And then I asked everyone else at the party for their middle names too. True story.

The Disney Baby Blog posted on middle name trends for babies in 2013 and came up with 7 common trends:

On Middle Name Pride Day you are supposed to reveal your middle name to 3 people who don’t know it already, so I’m announcing right now that my middle name is Rachel! I was given my middle name after my dad’s grandmother whose name was Ruth, but my parents used the letter R and chose Rachel.

Please won’t you indulge me and tell me your middle name? And your kids’ middle names too? I will love it!