It’s time for Book Club Friday! Plus another Literary Junkies Link Up. In the past two weeks I have finished 2 more books.

After reading Skeletons at the Feast (review here), I decided I wanted to read more of Chris Bohjalian. This is one of his newer novels. “The morning after her baptism into the Rev. Stephen Drew’s Vermont Baptist church, Alice Hayward and her abusive husband are found dead in their home, an apparent murder-suicide. Stephen, the novel’s first narrator, is so racked with guilt over his failure to save Alice that he leaves town. Soon, he meets Heather Laurent, the author of a book about angels whose own parents’ marriage also ended in tragedy. Stephen’s deeply sympathetic narration is challenged by the next two narrators: deputy state attorney Catherine Benincasa, whose suspicions are aroused initially by Stephen’s abrupt departure (and then by questions about his relationship with Alice), and Heather, who distances herself from Stephen for similar reasons and risks the trip into her dark past by seeking out Katie, the Haywards’ now-orphaned 15-year-old daughter who puts into play the final pieces of the puzzle, setting things up for a touching twist.” I did not love this book and it was by far my least favorite of the Bohjalian books I have read. It took me a long time to get into it. Yes, there was the twist ending that I love, but otherwise I didn’t find this book worthwhile. Apparently it’s becoming a Lifetime Movie starring John Stamos. Hmm. I can’t really picture John Stamos as a minister!

A few of my friends and I do a book swap where we send around a box of books and when we each get the box, we take out some books and replace them with others. This came out of the last box I received. I don’t believe I’d ever read Kristin Hannah before, but I’d heard of this book. I am so glad I chose it! I loved this book. “From the beginning, Tully is desperate to prove her worth to the world. Abandoned by her mother at an early age, she longs to be loved unconditionally. In the glittering, big-hair era of the eighties, she looks to men to fill the void in her soul. But in the buttoned-down nineties, it is television news that captivates her. She will follow her own blind ambition to New York and around the globe, finding fame and success . . . and loneliness.  Kate knows early on that her life will be nothing special. Throughout college, she pretends to be driven by a need for success, but all she really wants is to fall in love and have children and live an ordinary life. In her own quiet way, Kate is as driven as Tully. What she doesn’t know is how being a wife and mother will change her . . . how she’ll lose sight of who she once was, and what she once wanted. And how much she’ll envy her famous best friend. . . .For thirty years, Tully and Kate buoy each other through life, weathering the storms of friendship—jealousy, anger, hurt, resentment. They think they’ve survived it all until a single act of betrayal tears them apart . . . and puts their courage and friendship to the ultimate test.” There were two problems I had with the book. The first was in the beginning, in the 70’s, I felt like the description was an exaggerated caricature of the 70’s. But the time periods in the book became one of my favorite parts. I loved how the story went through time and referred to major historical events as it went. I also loved how each section was introduced with the lyrics from a song representing that decade. The second problem I had with the book was that I knew a betrayal would be coming since it was mentioned in the description of the book and I felt like I was just waiting for it to happen. Also, seeing that the book was compared to Beaches, I had an idea of what was coming at the end. I really liked reading this book. I felt like I knew the characters, or like I was watching a movie of them rather than reading a book. I would definitely read more by Kristin Hannah. 1. Which book could you read over and over? Why?

over and over, until I loaned it to a friend and never got it back. It’s a really amazing book and I highly recommend it! I also could read The Time Traveler’s Wife over and over because its the kind of story where you can discover new things with each reading.

2. If you could be any character from any book you’ve read, who would you be?

I think I’d have to go with Hermione Granger. She has supportive parents, great friends, is really intelligent, and happy.

3. Do you ever put a book down because you just can’t get into it? Or do you stick it out to the bitter end? Any examples?

I didn’t used to, but recently I did it a couple times. I wrote about some of my unfinished books here.

4. Show us your book shelves! Do you have one designated spot in your house for all your books? Do you scatter them around?

Most of the books I keep are in my living room on the built in book shelves. I also have books in my office that I either haven’t read yet or am ready to get rid of. I list my books at paperbackswap.com when I get around to it! 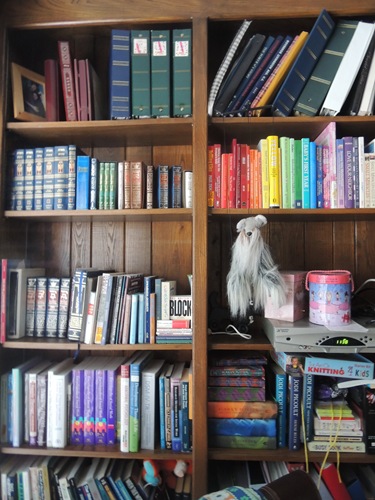 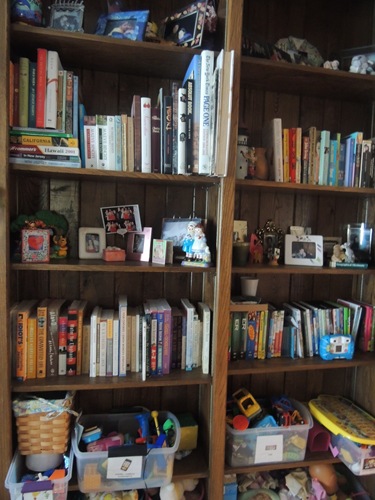 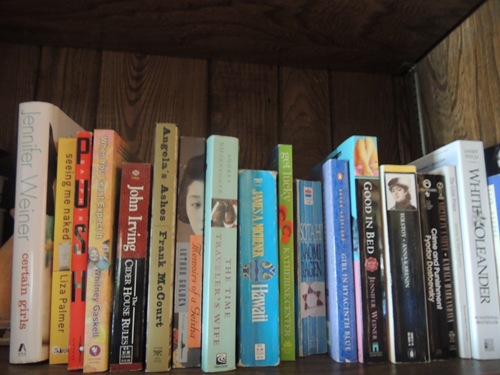 Have you read any of the books mentioned (or seen) above? Wishing you all some time to read this weekend!

PS Just found this list of 100 Best Young Adult Novels – I’m going to have to read some of them!