The following are 7 people that I would love to meet personally. I have copied their basic biographic information, but I didn’t specify why I want to meet each of them. I think my reasons should be obvious! 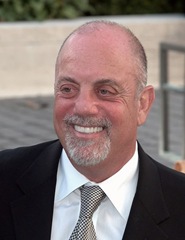