What do Sophia, Isabella, Emma, and Emily have in common with Jacob? These five names have been on the top of the charts for baby names over the past five years according to the Social Security Administration. While the top girls’ name has changed each year (aside from Isabella which topped the chart in both 2009 and 2010), the top boys’ name has remained Jacob from 1999 all the way until 2011 (2012’s data has not yet been released). It is funny to me that Jacob was my top baby boy name choice when I was pregnant with Gabbie and I considered it again for each of my boys, but ultimately the names we chose were not anywhere the top of the charts.

I find the Social Security site interesting because it is official, but there are a lot of fun baby name tools to play with on there. And I know I’m not the only one out there who likes to discuss names!

So just for fun, I used the site for a little experiment. After clicking on the tab (on this page) labeled “Popular Baby Names by Birth Year” I entered my birth year (1978) and chose Top 1000 from the dropdown menu under “popularity.” Then I found my name on the page (using ctrl+F) and discovered that my name was #598 that year. My husband’s name on the other hand was #4! This may show why I usually like less popular names and he is a bigger fan of the common ones! I also did this experiment for our children’s names – Gabriella was #61 in 2005, Zachary was #42 in 2007, and Simon was #250 in 2010. Interesting? I think so!

Other cool things I found on the site were: 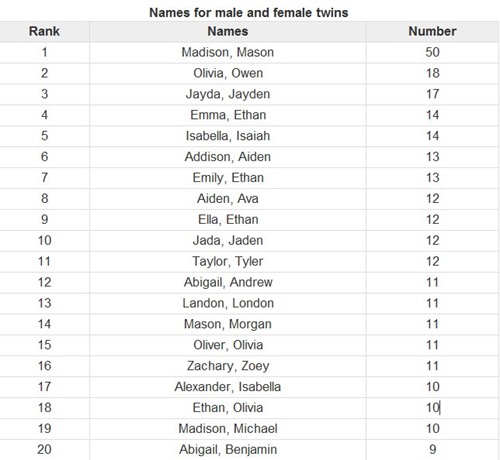 Would you ever name your twins Jayda and Jayden? Taylor and Tyler? Oliver and Olivia? I think I’d get a little confused! Interestingly, when I used to daydream about having twins, I thought I’d name girls Gabriella and Maya, boys would be Jacob and Noah, and a boy and a girl would be Noah and Maya!

What about you? Do you like to think about baby names? How do the names in your family rank on the top baby name lists? If you had twins, what would you name them?