The first day of Hanukkah was so busy! (Hanukkah, like all Jewish holidays, began at sunset – so Saturday night was the first night, while yesterday was the first day. Today is the second day!) We bounced around town and hit four different Hanukkah celebrations!

Before I share photos from those celebrations, how about a quick intro to Hanukkah?

During the time of the 2nd Temple (168 BCE), the Holy Land was ruled by Greeks. They robbed the Jews of their property, and set up idols in the Temple. Mattityahu and his sons (The Maccabees) fought the Greeks and drove them from the land. It was a great miracle that a small band of Jews defeated the mighty Greek armies. Another miracle that occurred was the miracle of the oil. The Greeks had made all the oil in the Temple impure. Oil was needed for the menorah in the Temple, which was supposed to burn throughout the night every night. There was only enough oil to burn for one day, yet miraculously, it burned for eight days, the time needed to prepare a fresh supply of oil for the menorah. An eight day festival was declared to commemorate this miracle. (via chabad.org / jewfaq.org) 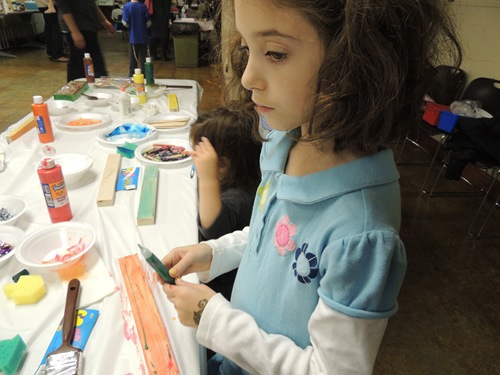 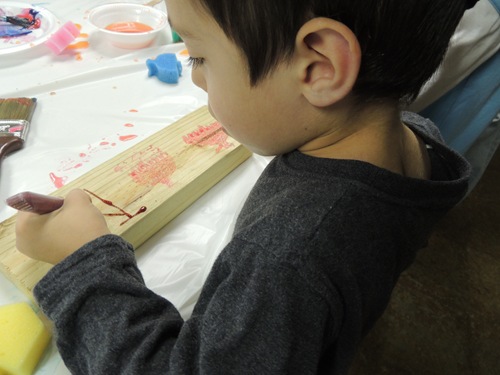 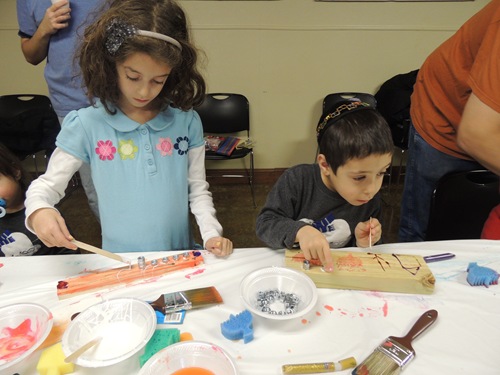 The Hanukkah candles are arranged in a candelabra called a menorah (or sometimes called a Hanukkiah) that holds nine candles: one for each night, plus a shammus (servant) at a different height. On the first night, one candle is placed at the far right. Each night, another candle is added from right to left (like the Hebrew language). Candles are lit from left to right (because you pay honor to the newer thing first). On the eighth night, all nine candles (the 8 Hanukkah candles and the shammus) are lit. (via jewfaq.org) 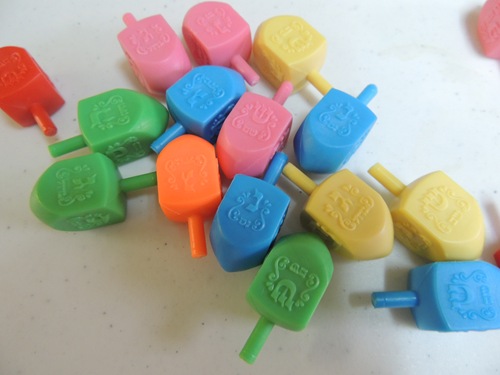 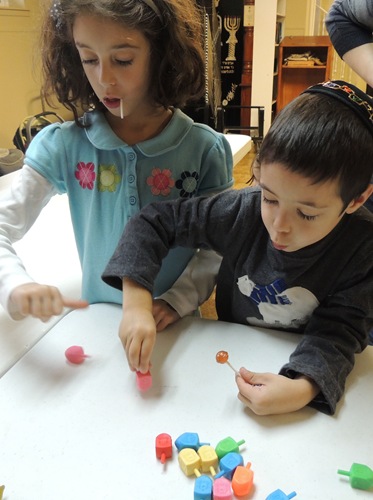 One tradition of Hanukkah is playing dreidel, a gambling game played with a square top. The traditional explanation of this game is that during the time of the oppression, those who wanted to study Torah (an illegal activity) would conceal their activity by playing gambling games with a top (a common and legal activity) whenever an official or inspector was within sight. A dreidel is marked with four Hebrew letters: Nun, Gimmel, Hey and Shin. These letters stand for the Hebrew phrase “Nes Gadol Hayah Sham”, a great miracle happened there, referring to the miracle of the oil. (via jewfaq.org) 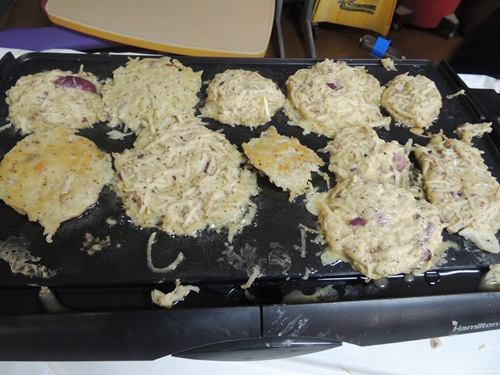 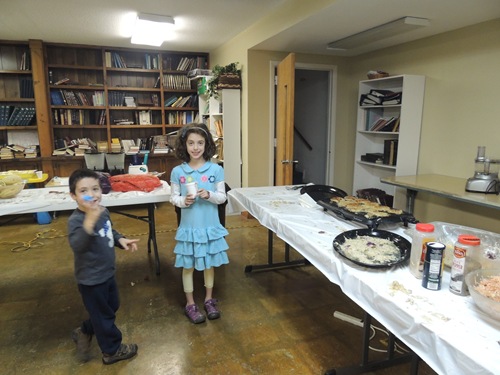 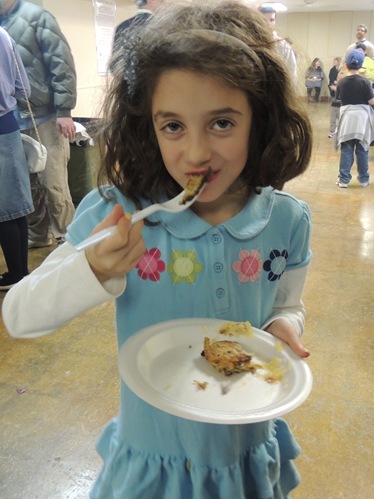 It is traditional to eat fried foods on Hanukkah because of the significance of oil to the holiday. This includes latkes (potato pancakes) and sufganiot (donuts). The latkes this morning were SO good! 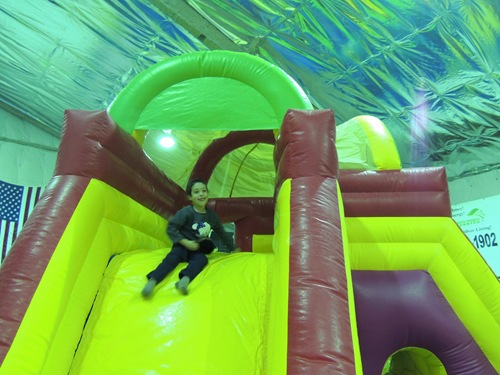 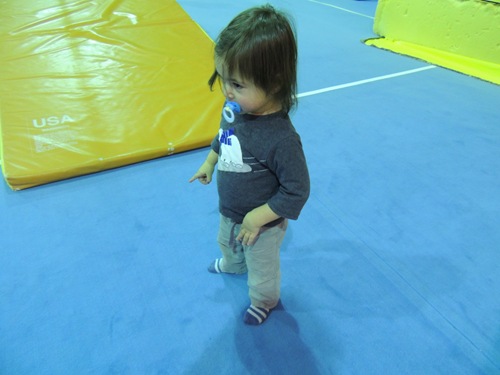 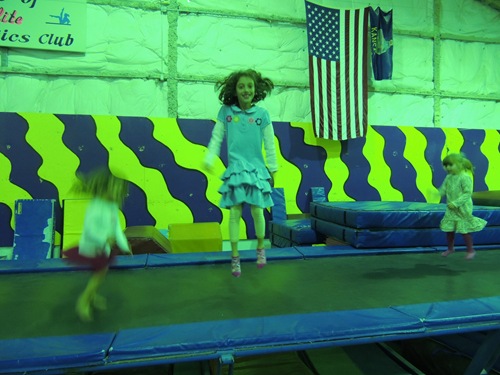 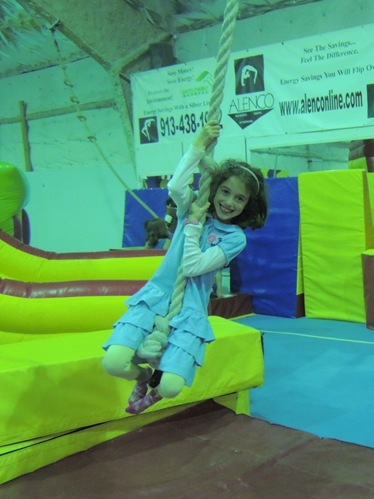 Gymnastics! A Hanukkah tradition because…just kidding. It’s just fun! It really looked this strange color in the room, so I apologize for the yellow tinged pictures! 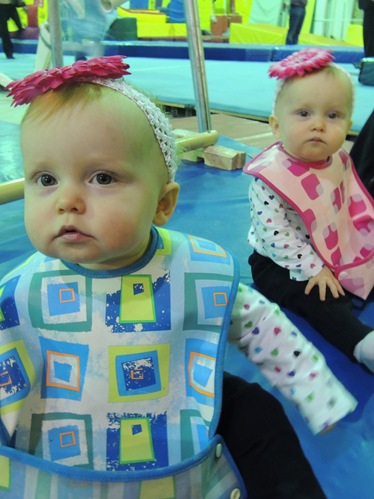 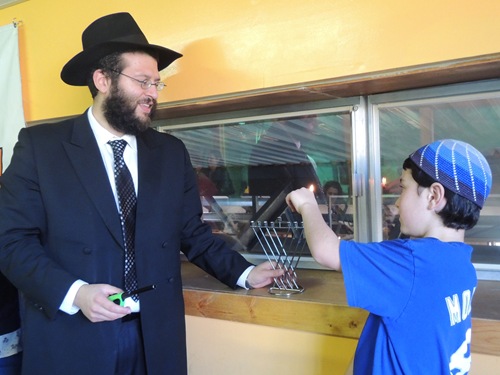 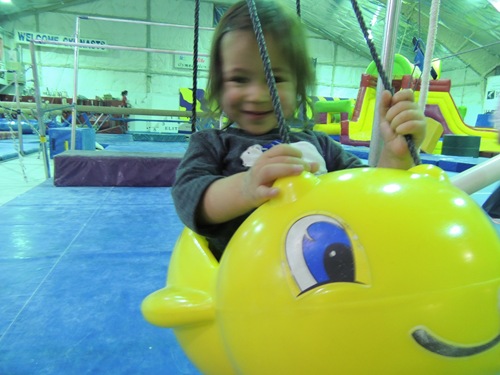 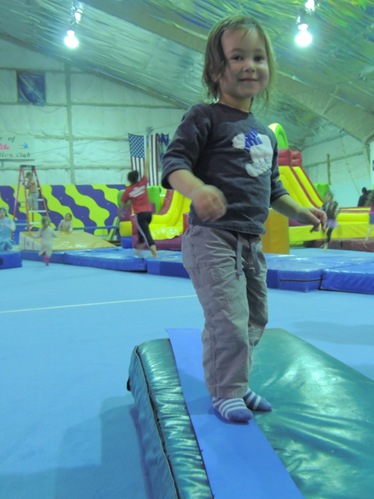 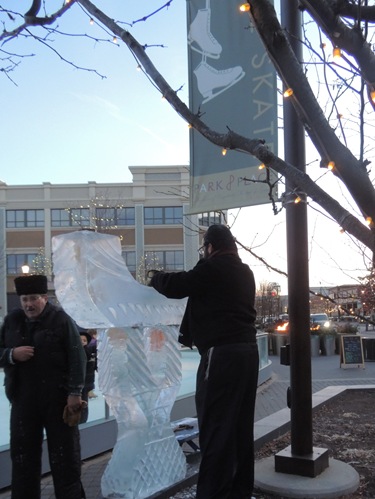 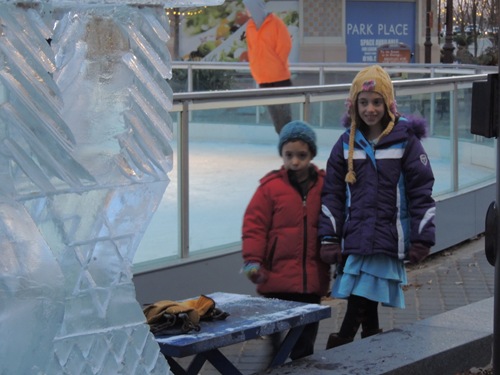 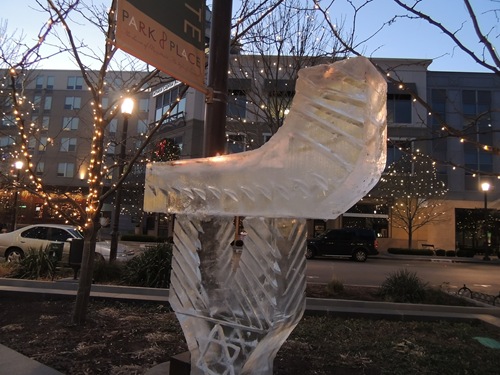 A menorah made out of ice! This one was a last minute decision when we realized we had time for an extra stop on our Hanukkah tour. We had some yummy hot chocolate and donuts! 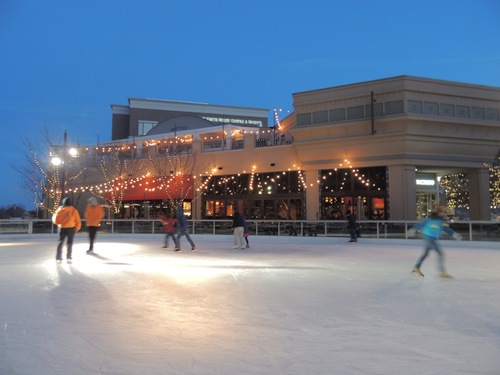 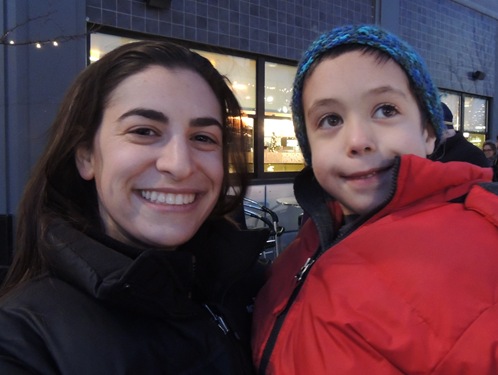 This is one of Simon’s teachers, who Zachary knows from his 2 years at Simon’s current school.

By this time it was getting really cold outside! But we continued on to the Fourth Celebration: 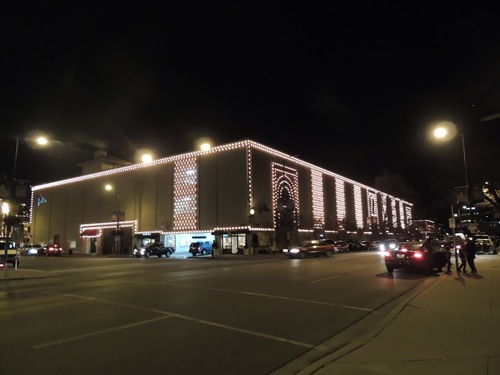 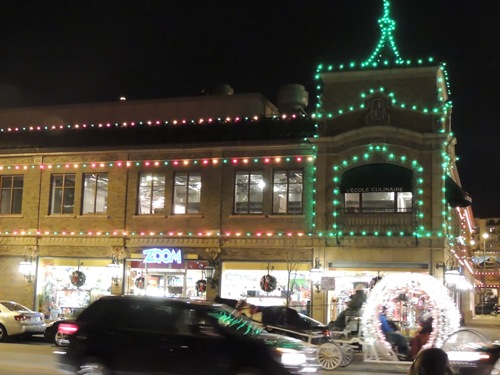 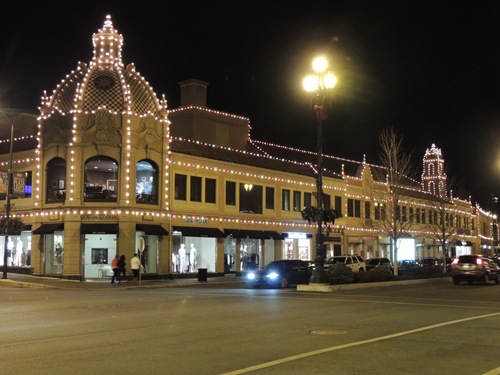 Only we didn’t get to see them light the menorah. It was too cold for me! We ate some more latkes and donuts and hot chocolate and saw this from our car: 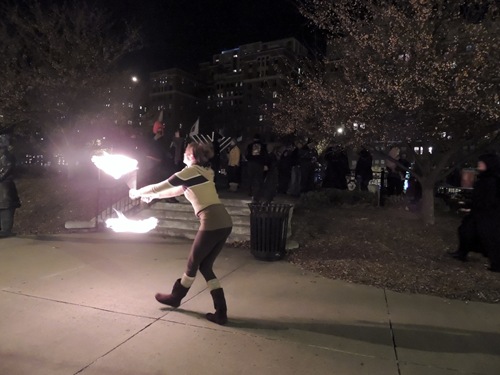 And when we got home: 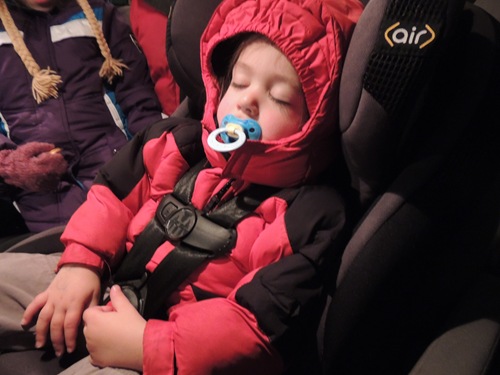 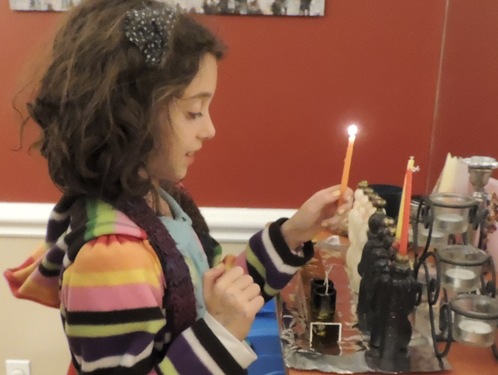 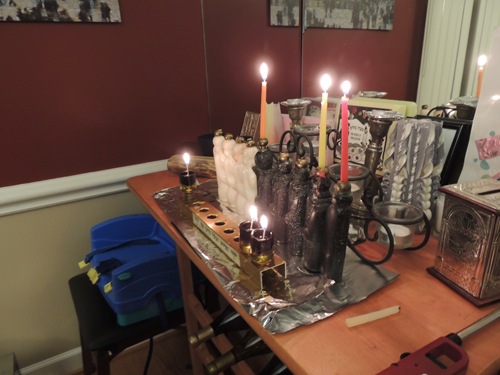 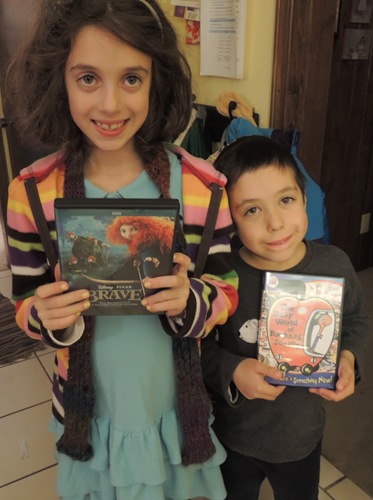 These videos were on my list for night #3, but since Simon went to sleep and I didn’t have a night #3 present planned for him, I switched them to night #2. If you can’t tell, Gabbie got Brave and Zachary got Busytown – 30 episodes worth!

Are we all Hanukkah-ed out yet? NO! Stay tuned for more!