I’m not sure where to begin, so I’ll begin with the end. We finished! We did it. Our goal was to finish under 3 hours and I had thought we could finish in 2:45, but our finish time was 3 hours and 56 seconds. Our average pace was 13:48 per mile. I’ve run faster than that over the past month of training, but it’s pretty consistent with my ability and I’m not entirely disappointed, as there were various things that contributed to the slower pace along the route. And those things were exactly why I did this in Disney World and would not do it anywhere else. Without further ado, here is a mile by mile recap of the 2012 Wine & Dine Half Marathon!

We arrived at the Wide World of Sports at approximately 7:30 PM Saturday night. Race time was 10 PM. It was my birthday! The DJ announced that there were 68 people celebrating their birthday that day! 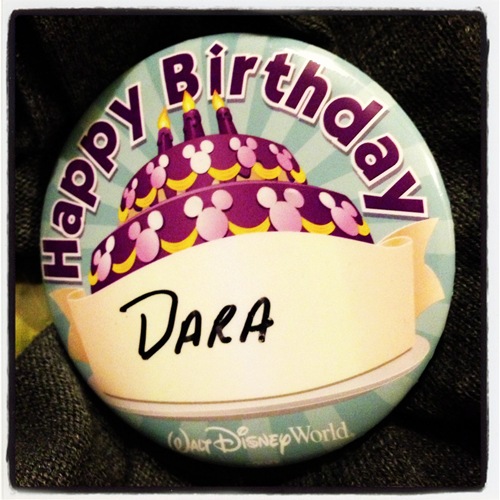 We got in line to meet Mickey Mouse right away. While in this line, we did a few things. We called the kids on facetime and showed them around. We checked our run bags. I stood on an almost as long bathroom line. Everyone was called into the corrals. I almost thought Dave disappeared. And finally we got to the front of the line! 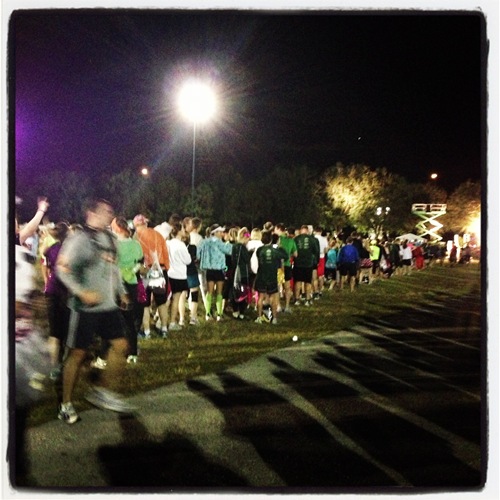 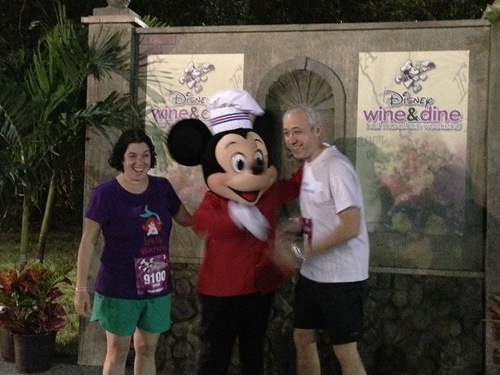 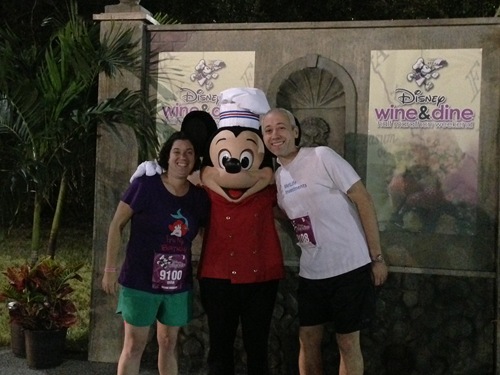 We were then one of the very last people to get a picture with Minnie Mouse as well. 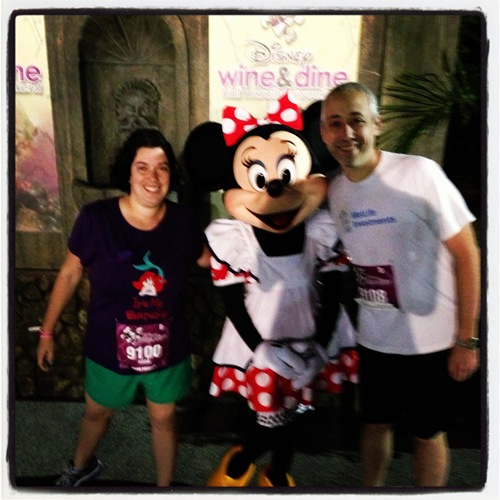 And then we used the bathroom again and headed out to corral D. 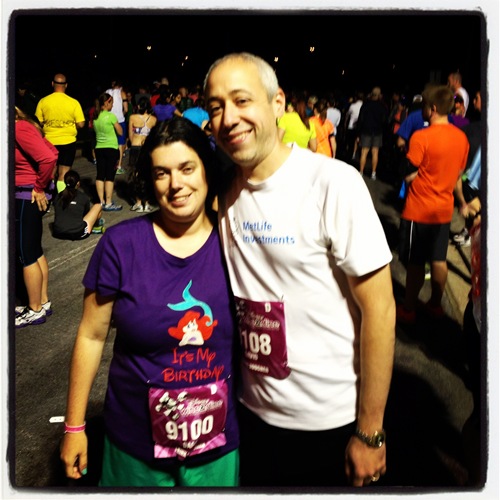 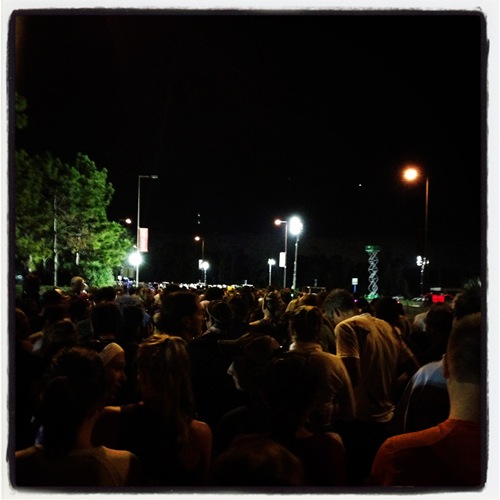 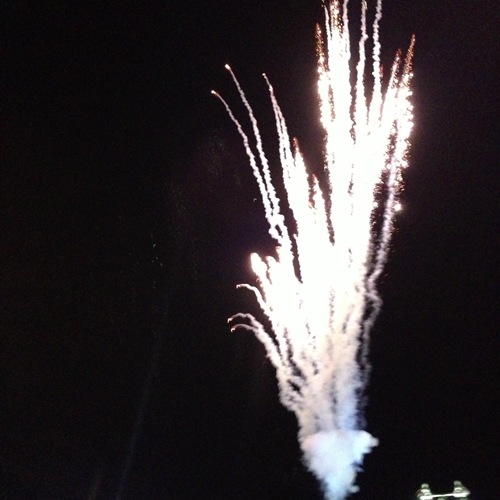 Part of Mile 0 was getting to the start line!

I had to go to the bathroom right away. The first outhouses we passed had lines! We stopped at the 2nd set, in between the markers for mile 1 and 2. The miles were marked with signs, but I didn’t get pictures of any of them. There were a few characters out too but we passed them by. I did take a picture of this guy from the Main Street Electrical Parade, though I don’t know exactly where he was on the course. 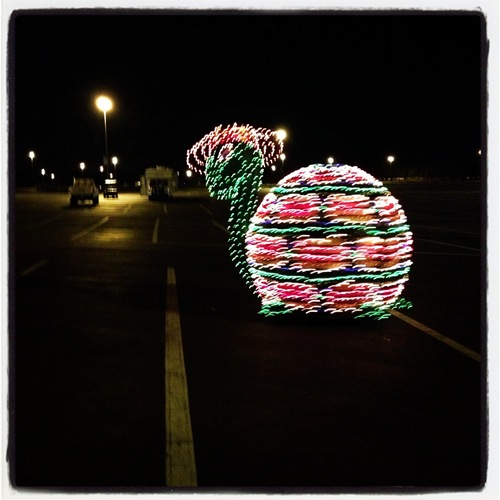 Mile 3 was probably my best mile. I didn’t have to pee anymore, and the course was wide open. Entering Animal Kingdom after the Mile 4 marker, the course got narrow and congested! We also stopped for a picture with the Tree of Life. 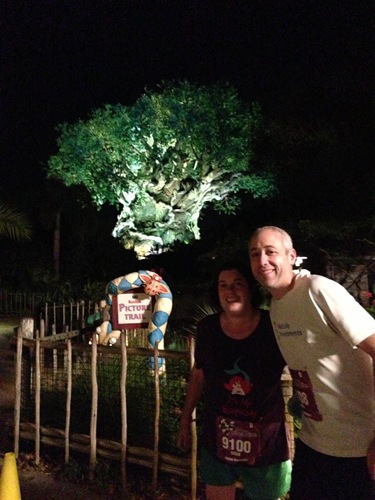 We were surprised when we passed the Mile 5 sign because it seemed to come up quickly! Soon we were leaving Animal Kingdom and heading back the way we came in.

Now we were on our way to Hollywood Studios. The trek over there took awhile. We had two good miles. I drank too much Powerade and started feeling nauseous. I had to slow way down again. We also got a picture with this guy. We entered Hollywood Studios at Mile 9. We entered by Tower of Terror and Rock n Roller Coaster and came in around past the front entrance to the park. There we stopped for a real bathroom. Yes that makes bathroom stop number 2! I was so excited for Pixar Place as it’s one of my favorite areas in the Studios. We stopped for a picture with Woody, and just as we moved on, Buzz came lumbering out too! 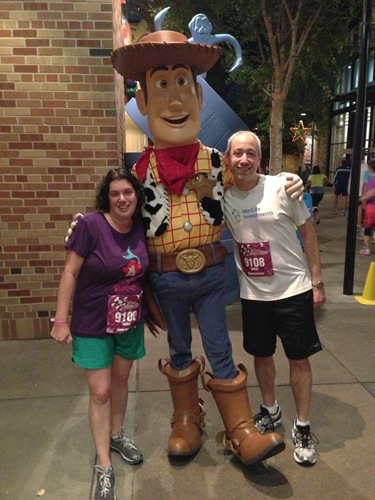 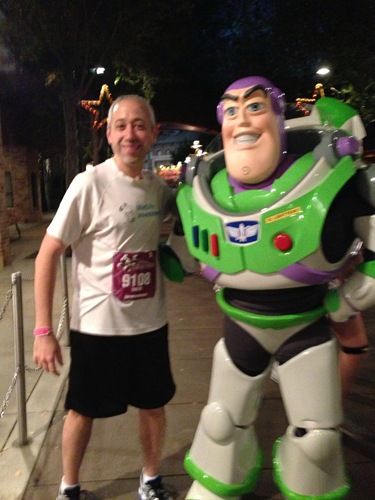 The course then wound through the back of Hollywood Studios in the backstage areas, coming back in on the Streets of America, where the Osborne Lights were on. It was nice, but I didn’t get any pictures. We thought we were going to run across the Lights, Motor, Action stage, but it soon became apparent that we were leaving the park without hitting that area.

After Hollywood Studios, the course got really narrow on the path over to the Boardwalk area. It was congested with runners and medics on bicycles! I was past the farthest I’d ever run and my legs were killing me. I was actually surprised that I was feeling so badly at this point! Dave kept trying to speed up and twice I had to ask him to wait for me. Then I offered him to go ahead of me, but he wouldn’t, what a great husband. At some point I forgot we’d already past mile 11 and was relieved to know we were almost at 12. Finally we passed the Boardwalk and entered Epcot! People kept yelling One More Mile when it was either more or less than a mile to go. And we kept going. Finally we approached the home stretch and we held hands as we crossed the finish line!

Our official results were: 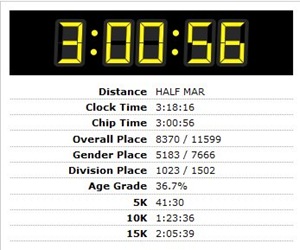 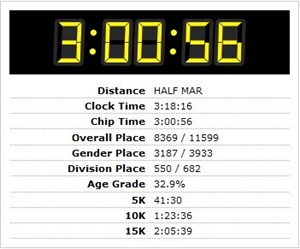 I was handed a snack box and a water and then I approached the volunteers handing out medals.

And then the worst moment of the night happened. The lady giving me my medal said congratulations on finishing and then looked at my shirt, which clearly said “It’s My Birthday,” so I thought her next words were going to be “Happy Birthday.” Instead, she said “How far along are you?”

No, I’m not expecting.

Yes, I know my stomach muscles stick out disproportionately to the rest of my body. This is due to having had 3 kids. And I probably need surgery.

Ladies, unless a woman is obviously hugely pregnant or tells you she is pregnant, DO NOT ASK IF SHE IS PREGNANT!!

After a picture, a quick change and refresh in the changing tent, we headed on into Epcot. 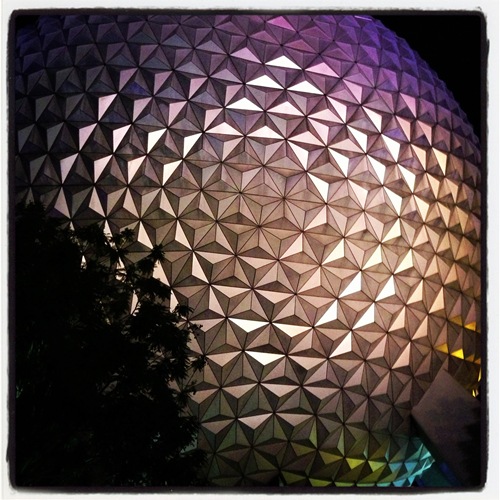 Straight onto Spaceship Earth and the sighs of relief as everyone got into their seats were hilarious! 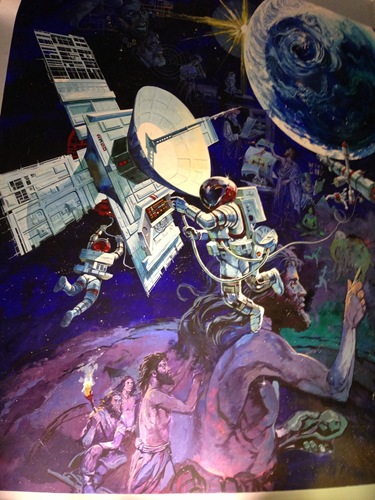 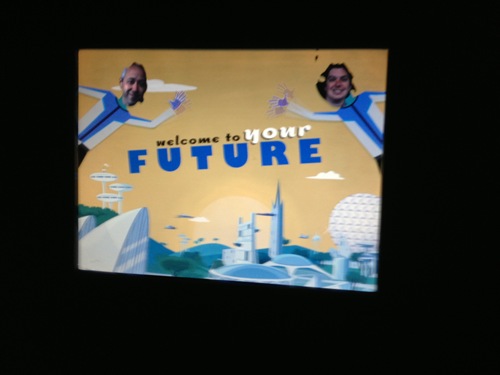 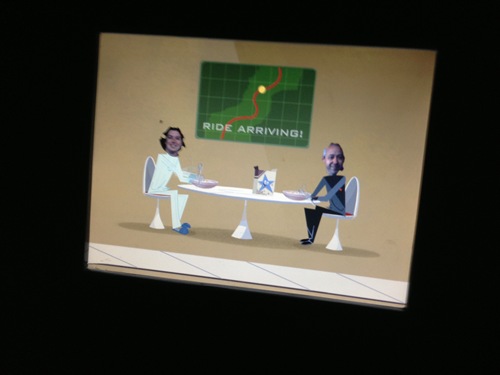 Next stop was the Land Pavilion for Soarin’. We had a bit of a wait and I tried to eat some of my snack box but it made me feel nauseous again. Luckily a flight over California cured me of that feeling! Onto the Seas with Nemo and Friends! I love Nemo, here’s me! 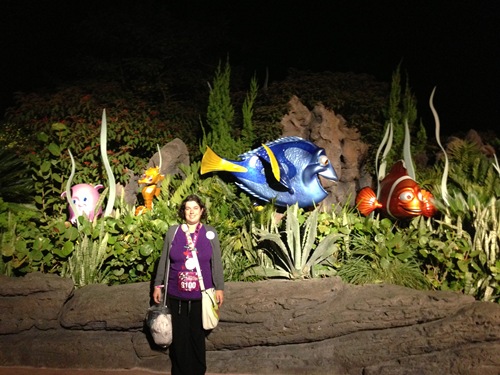 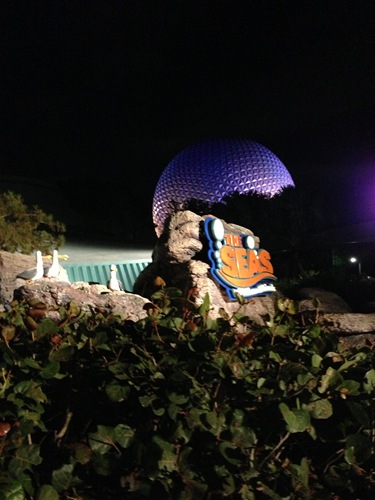 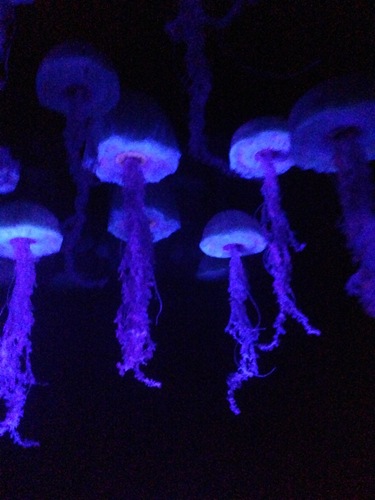 From there we were off to the World Showcase. I was hoping to meet a bunch of characters and have them sign my “I did it!” shirt! We also rode Maelstrom in Norway. 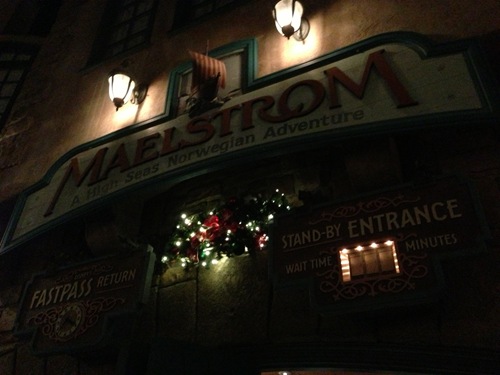 We just missed Mexican Donald, but had a great meet up with Mulan and Mushu. Mulan signed my shirt for both of them. Mushu “breathed fire” and blew on my shirt. 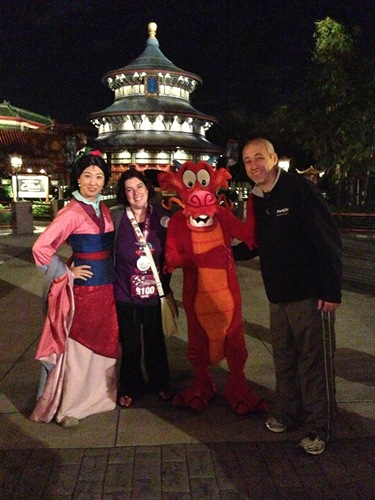 We also met Pinnochio and Gepetto but the cast member there took horrible blurry pictures, so I can’t show them to you! At 4 AM Epcot closed and we headed back to the Dolphin, on foot, which was a bit of a painful walk, but we were in bed by 4:30!

All in all, a good experience, I’m glad I did it, but I don’t plan to run another 1/2 Marathon any time soon!

Stay tuned for more Disney related posts in the days to come!