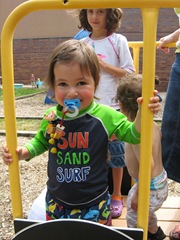 This is my little boy. His hair is long because we have never cut it. I dress him like a boy, but people think he’s a girl. I’m not embarrassed to have a long haired boy, but it is embarrassing when people think I have a girl that I dress like a boy. 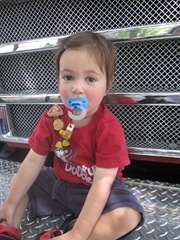 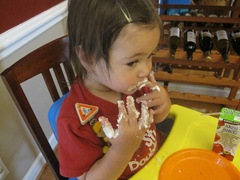 When we were in San Antonio, he was wearing the red shirt you see above. It says “Stunt Double” on it. A nice lady told me she loves “her” shirt. I said thank you. Later in our trip, a worker in the supermarket said “goodbye young lady” and I answered “he’s a boy.” Only she was talking to Gabbie, not to Simon! Oops. 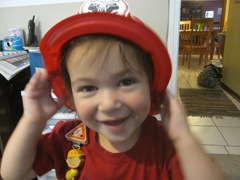 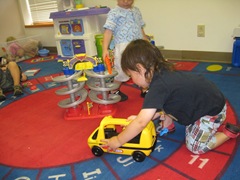 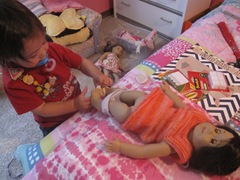 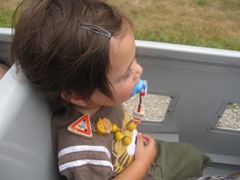 So why does Simon have long hair? It’s interesting really, because most people ask us if we let Zachary’s hair grow when he was little, and the answer is we didn’t. We cut it once his bangs grew into his eyes:

It is a Jewish custom to grow a boys’ hair until he is 3.

The third birthday is a significant stage in the life of a Jewish boy. It is then that he officially begins his Torah education, and starts to wear a kippah and tzitzit. On a developmental level, three years old is a key transition time. Until now, the boy was a baby — blanket, bottle, diapers. Now he is ready to move into the world of friends, school, etc. Cutting his hair at this time makes a strong emotional impression on the child. He knows that he is advancing to a new stage of maturity, and this helps him live up to the new role.
– Aish.com

There are many boys in our community who are a few months younger than Zachary and had their haircut for the first time at a party – an upshirin – when they turned 3. It was at one of these parties when I realized I like this custom and might like to do it myself. At first, I thought I would just grow Simon’s hair until it got on my nerves. However, it does get on my nerves and I still have not cut it. I think I will regret it if I do. I have a lovely vision in my head of a 3 year old boy, looking grown up with his short hair cut, being done with diapers, his paci, and nursing, ready to wear a kippah and tzitzit, all done being a baby.

And for now, at not yet 2 years old, Simon is still a baby boy with baby boy hair. 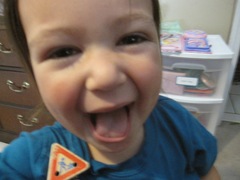 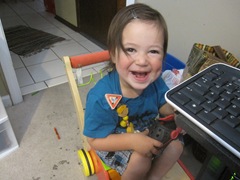