This week I took on probably my biggest project yet. In our master bathroom, we have a built in medicine cabinet. However, we also have cabinets inside 2 mirrors and we were not using the built in. I had the genius idea to remake the cabinet into a display shelf. I also wanted to use the cabinet door as the wood back for another idea I had floating in my head. Thus began my project. 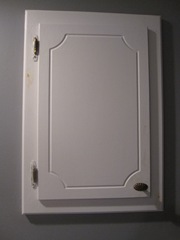 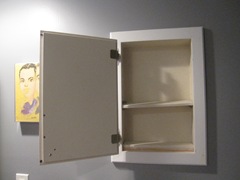 After I hung Gabbie’s mirror in her room, she suggested that she would like a place to hold her hairbrush near the mirror. I decided to make her a smaller version of the plan I had for my cabinet door. The plan involves mason jars. And painted chevron stripes. It was a learning experience the whole way through. 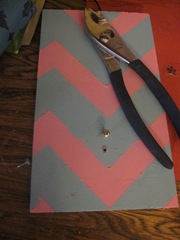 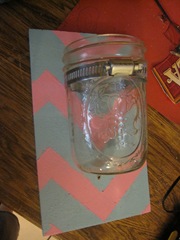 Using a small board I got at Home Depot, I first spray painted the background blue. That part went fine. Then I had to figure out how to paint the stripes. I printed the chevron pattern here, then cut it out and taped around it. Now to attach the mason jar. I planned to use pipe clamps, but couldn’t figure out how to attach them to the board. Finally I found a site that suggested using two screws, one on top and one under the pipe clamp, to hold it on the board. Only I couldn’t get the screws into the board! My husband even tried to help but I had stripped the screws and he wanted to go to bed. Thus the pliers in the photo above. I used them to remove one of the screws. The other is still there. Then I turned the board the other way and tried again, this time drilling deep holes before trying to add the screws. I decorated the bottom of the board with flower stickers to cover the extra screw and hole! Then I had to attach a picture hanger to the back. Couldn’t get the nails in. Decided to glue it on instead. Phew. 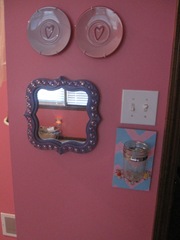 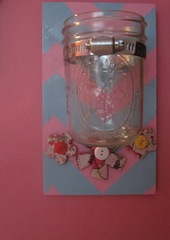 Back to the bathroom. I wanted chevron stripes on the background of the display shelf and on the cabinet door / board. This time the stripes didn’t go on very well. I had painted everything white first, but when I removed the tape, I also removed some of the white paint. I used the same color as my bathroom walls for the stripes, but some of the color bled under the tape. So I had to do a lot of touch ups. At this point it’s about as good as it’s going to get. 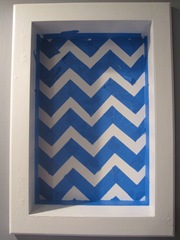 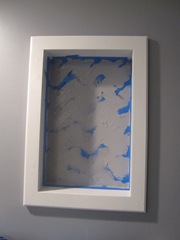 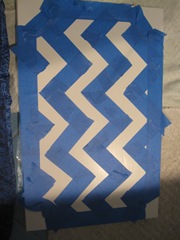 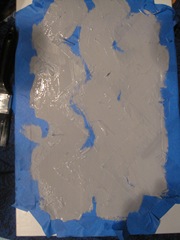 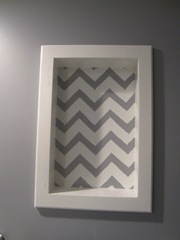 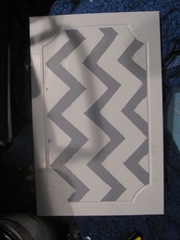 I replaced the shelves and added my lighthouse decor, plus 3 new to me glass bottles which I love for their colors! 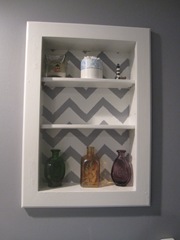 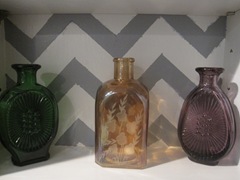 I have an empty shelf, plus one more shelf board to use!

Next it was time for the mason jar holder. This time it went much better than the 1st time! I added the picture hangers to the back first. Then I measured, drilled and screwed. Here it is: 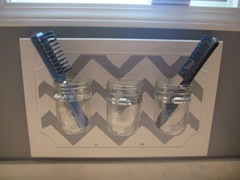 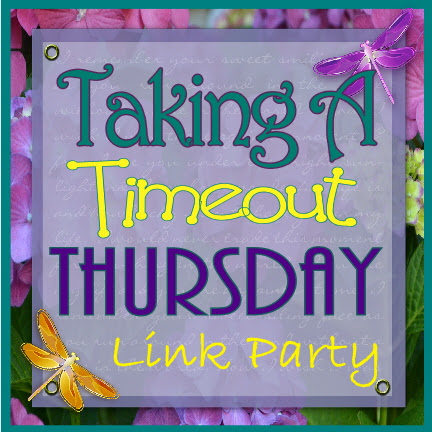