Today is the last day of a long two week winter break for Gabbie and Zachary.  I have seen a lot of great things happening for all three kids these past two weeks and just wanted to share them here.

Starting with Simon – he has made a lot of advances just lately! He now reaches for toys and tries to play. If you hold up your hand, he will reach for it / “give 5.” He is almost growing out of his 3-6 month clothes – and he’s only 4 months! My other kids always wore the size marked for their age at the time! He’s also almost outgrown the baby setting of our Phil and Ted stroller. He’s rolling onto his side, and yesterday he just about rolled the whole way to his belly while lying on my bed. He’s becoming even more interactive and will smile at people easily. He is starting to listen to us read to the other kids at bedtime. He had a lovely time with Grandma and Grandpa while they were here!

Gabbie and Zachary were able to spend a lot of time with Grandma and Grandpa as well during their first week of vacation. They went to a program at the JCC where they watched Toy Story 3. Zachary even won the grand prize – a bag full of candy which there was no way I was letting him eat! They visited the Money Museum and the Omaha Zoo, as well as the Johnson County Museum – Kidscape.

Gabbie had a great time reading Rebecca and Ana

with Grandma.  She also worked on her winter break homework and was able to complete both her Hebrew and English homework packets. 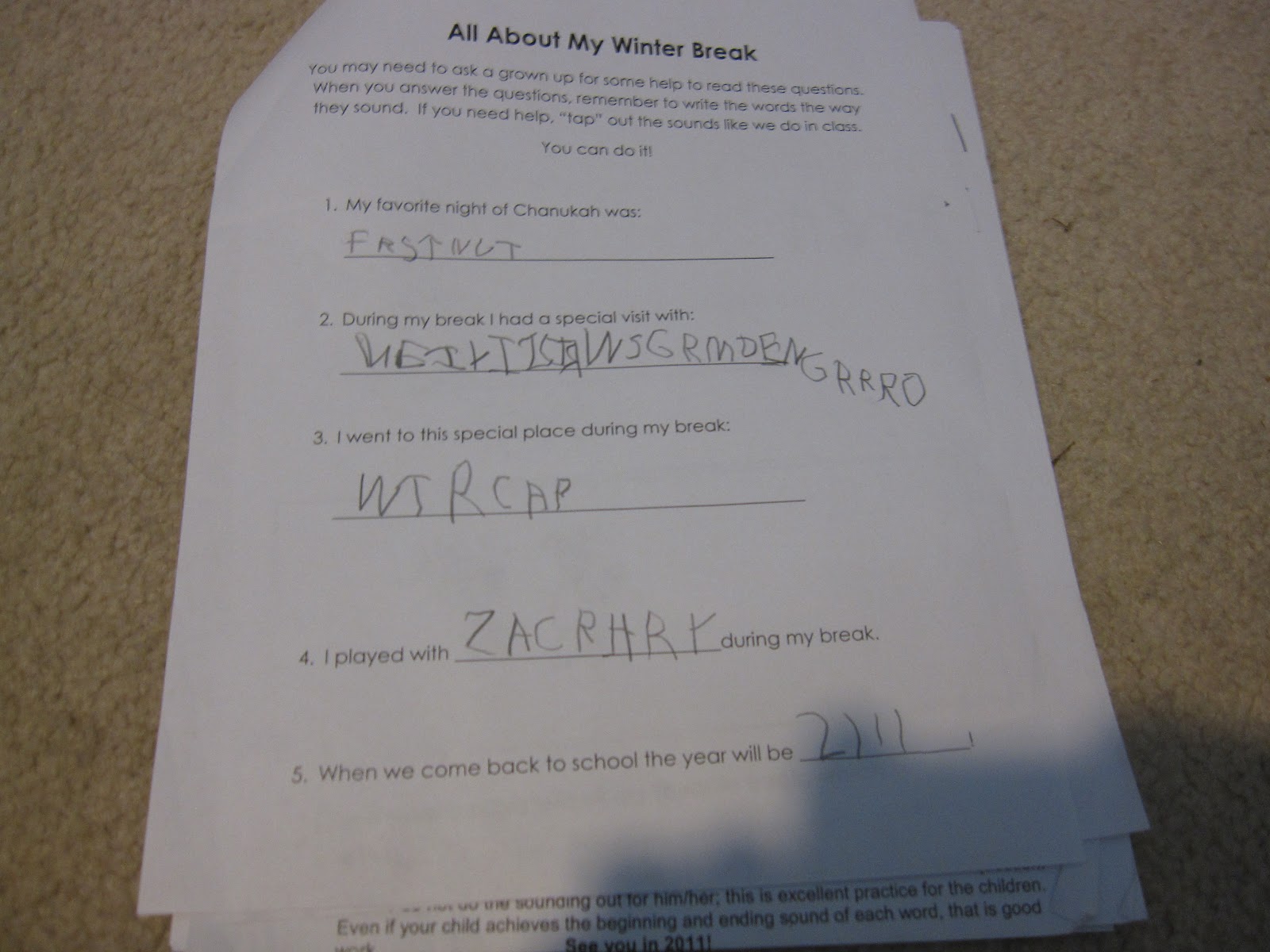 This was my favorite page of her homework because she had to write her answers on her own and I think she did a great job sounding out words. In case you can’t figure out what she wrote here, her favorite night of Hanukkah was the “first night,” her “visitors was Grandma and Grandpa,” during the break she went to “winter camp,” she played with “Zachary,” and the new year is 2011 – she wrote it 2111.

Zachary’s big news right now is that he is using the potty. He has been wearing underwear for 2 weeks now and has varied sucess. He has gone more than a few days without any accidents at all, and some days he has had multiple accidents. I am really proud of him though, as he is doing a great job.

For the second week of break, the kids went to Winter Camp at TLC.  It was a great program and the both Gabbie and Zachary enjoyed it a lot. They went swimming and bowling, saw a magic show, went to Jumping Jax, and baked both cookies and challah as well as making various other projects such as the candy sushi shown in the photo above!  Both kids also enjoyed various play dates with their school friends.

Dave and I also took advantage of our out of town babysitters right up until last night when we went to a birthday party / welcome back party for a friend. It was really nice seeing all of the younger people in our community together and it made me feel good to be able to call so many people our friends.

So, overall we all had a nice two weeks and hopefully the transition back to school will not be too difficult for any of us!